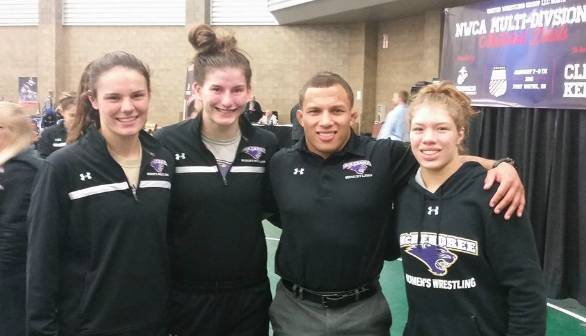 Wrestling is back in full swing with great competition over the past week at the college and high school levels. The college women travelled to Fort Wayne, Indiana to compete in the NWCA (National Wrestling Coaches Association) Multi-Divisional National Duals Friday and Saturday. The high schoolers continued their weekly competition as they move closer to the state championships in February.

McKendree University, currently ranked #8 in the Women’s College Wrestling Association (WCWA)/Intermat rankings (January 4) went 4-1 in duals competition over the two-day tournament to finish 5th overall. On Friday, the McKendree women recorded victories over #20-ranked Waldorf College (39-1) and #10 Life University (32-17). Saturday began with a victory over #15 Missouri Valley College (29-18) followed by their sole loss of the weekend to #5 Campbellsville University (16-29). The highlight of the weekend was an upset victory over #6 Lindenwood University (24-21).

Megan Black of Batavia, ranked #6 at 123 pounds in the WCWA/Intermat rankings (January 4th), went 2-1 for the weekend pinning Jennifer Juarez of Life University and earning a technical fall over Savanna Nobile of Lindenwood. Black’s loss came as a fall to #1-ranked, 130-pounder Kayla Miracle of Campbellsville University who cut to 123 pounds.

Cassy Herkelman of Cedar Falls, ranked #9 at 136 pounds in the WCWA/Intermat rankings (January 4th), went 3-1 for the weekend picking up two, 10-0 technical falls over Bailey McLaughlin of Waldorf and Zoe Wight of Life University, followed by a first-period pin over Bethany Davis of Missouri Valley. Herkelman’s loss came as a fall in the final seconds of the match against #2-ranked Monica Ramirez of Lindenwood.

Jasmine Bailey of Iowa City, ranked #8 at 136 pounds in the WCWA/Intermat rankings (January 4th), went 2-1 for the weekend picking up a 12-2 technical fall at 143 pounds over Destiny Robinson-Crawl of Life University and a forfeit at 143 against Missouri Valley. Bailey’s loss came as a fall against #5-ranked, 136 pounder, Rosemary Flores of Campbellsville.

Missouri Valley College, currently ranked #15 in the Women’s College Wrestling Association (WCWA)/Intermat rankings (December 9th) went 1-3 in duals competition over the course of the tournament to finish 8th overall. On Friday, the Missouri Valley women lost to #7-ranked Wayland Baptist (17-30) and recorded a victory over #19 Ottawa University. Saturday began with an 18-29 loss to #8 McKendree University and finished with an 8-33 loss in a rematch with Wayland Baptist.

Anna Poyner of New Hartford, went 3-1 for the weekend with three pins over Jathiya Isaac of Wayland Baptist, Sarah Rocker of Ottawa, and Rizpah Umi of Wayland Baptist. Poyner’s only loss of the duals was by pin against #5-ranked Hailee Lilly of McKendree.

Final results for the duals were:

4th Place – University of the Cumberlands

History was almost made this week when 138 pound OA-BCIG sophomore McKinna Faulkenberry wrestled fellow sophomore Brittany Shumate of Woodbine in what was believed to be the first-ever sanctioned varsity match between two female wrestlers in Iowa. It was widely reported as such, however it was later discovered that a 1993 match between Atina Bibbs of Davenport Central and Stacy Light of Lisbon is believed have been the first. Regardless, it is an exciting story and demonstrates the rapid growth of wrestling among Iowa’s females.

Highlights since our last update include the following varsity performances:

Felicity Taylor of South Winneshiek picked up 2 pins, a 7-6 decision and a forfeit to go 4-2 for the week and improve her varsity record to 13-9. Taylor’s JV record remains at 1-1.

Shelby Blake of Osage picked up 2 pins and a forfeit to go 3-2 for the week and improve her varsity record to 6-18.

Mckinna Faulkenberry of OA-BCIG picked up a pin to go 1-2 for the week bringing her varsity record to 9-11.

Rachel Watters of Ballard went 1-2 for the week picking up a 9-3 decision bringing her varsity record to 9-8 for the season.