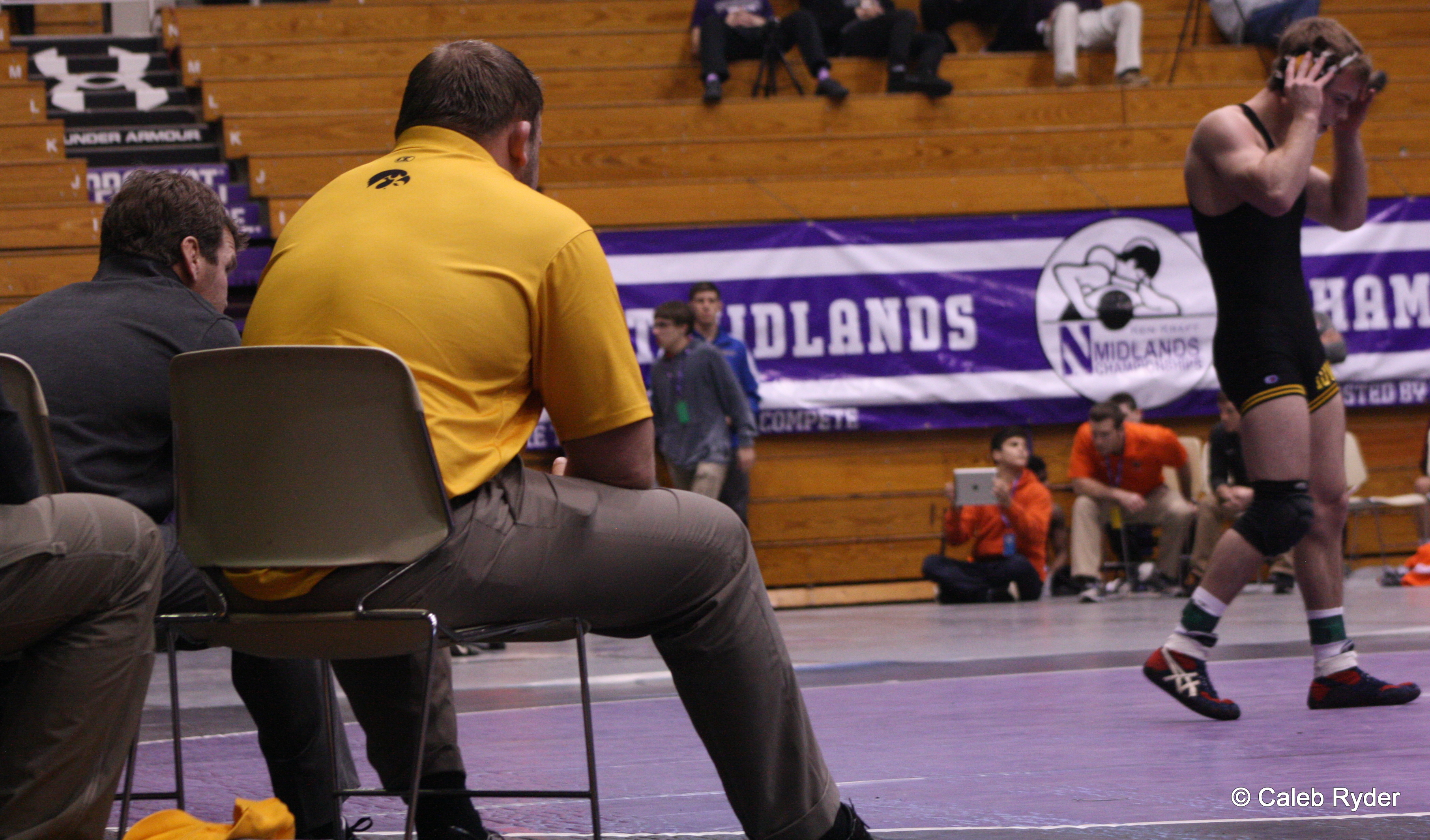 Three Hawkeyes punched their ticket to the finals during Wednesday’s first session at the 53rd Midlands tournament, while one each from UNI, Iowa State, and Grand View will make the final round.

Iowa’s Thomas Gilman finished out the top half of his bracket with a 4-1 win over the fifth seeded Joshua Rodriguez. Gilman had a little tougher time with Rodriguez than his other opponents, but he used a great ride in the second and third periods to advance to the finals.

Iowa’s other two top seeds, Brandon Sorensen, won his 149 pound semifinal match over Jake Sueflohn 7-4. Sorensen already has a win over the number two seed Jason Tsirtsis, defeating him in the dual last in year in sudden victory.

Nathan Burak gets the chance to defend his 2014 Midlands title, this time against Derek White of Nebraska.

At 149 pounds Michael Kemerer won his first match of the day, 20-7 over ISU’s Gabe Moreno, to send him to the 7th place match, but Kemerer dropped his next match to Nebraska’s Jake Sueflohn. Kemerer will wrestle for 5th tonight against Rider’s Bryant Clagon.

Iowa’s Alex Meyer and Sammy Brooks moved both dropped their semifinal matches today. Meyer lost to Ohio’s Cody Walters 7-0 to fall to the consolation semifinal, where he won a rematch with South Dakota State’s David Kocer 3-2. The third place match will be a battle of the number one seed in Meyer against the number two seed in Micah Barnes from Nebraska. Sammy Brooks dropped a hard-fought decision to David Taylor, 7-2 in the semifinal, but then came back and won a close match with North Carolina State’s Pete Renda, 8-7. Brooks gets North Dakota State’s Hayden Zillmer in the third place match. Brooks defeated Zillmer 5-3 to advance to the semifinals.

Iowa’s last third place match will come at heavyweight, where freshmen Sam Stoll. Stoll dropped his semifinal match to defending NCAA Champion Nick Gwiazdowski 10-1, putting him in the consolation semifinals against Maryland’s Dawson Peck. The Hawkeye would eventually pick up the pinfall victory in 6:42.

Patrick Rhoads was the only Hawkeye to wrestle for 7th place, and he secured a win by pinfall in 6:42 off of a poor shot by Buffalo’s Tyler Rill.

The Panthers had a disappointing day, going 1-5 in the bloodround of the tournament, including going 0-5 on the backside. The lone bright spot was 133 pound freshman Josh Alber. Alber took on Rutgers’ Anthony Giraldo in the semifinals after Giraldo took out Iowa State’s Earl hall in the quarterfinals. It took Alber a little while, but he got his offense going a little bit and won the match 5-2. It was Alber’s second win over Giraldo this year, and you can hear him talk about his match here.

Iowa State advanced Tanner Weatherman to the semifinals at 165 pounds. Weatherman picked up a pinfall win in just 46 seconds yesterday over Iowa’s Patrick Rhoads to advance to the semifinals, and he had a pretty easy 10-4 victory over the ninth seeded Adam Fierro.

On the backside of the bracket for the Cyclones Earl Hall took 7th place after defeating Lehigh’s Mason Beckman 11-3. Lelund Weatherspoon also wrestled for 7th place, and in dominating fashion; he put a headlock on Northern Illinois’ Trace Engelkes and won by pinfall in just 18 seconds. ISU dropped only one of their 7th place matches, and that was Gabe Moreno at 149 pounds. Moreno lost by pinfall in 1:12 to Ken Theobald of Rutgers.

For Grand View, wrestling veteran Andrew Long has had a pretty dominant tournament, with his closest match being a 14-4 major decision over Tyler Scotton from American University in the third round. Long won his semifinal over Ronnie Perry from Lock Haven by technical fall, 25-8. Long will face the Northern Illinois’s Steve Bleise in the finals tonight.

The finals, 3rd, and 5th place matches will start tonight at 8PM CST, not 7 like they were originally scheduled. You can catch the finals live on BTN. Be sure and check out our full gallery of photos as well, you can find those here!