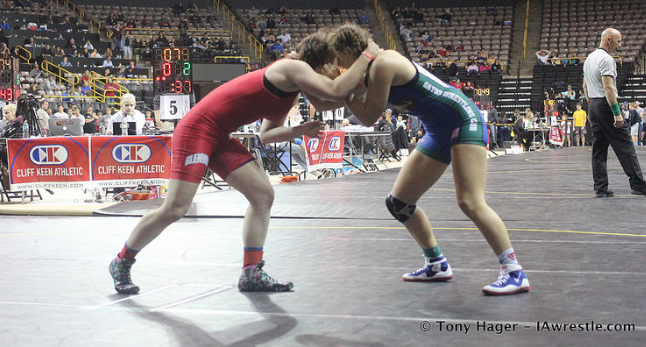 Day two of the US Senior Nationals saw four Iowa women wrestling; three of which were competing at the 63kg weight class and one at 69kg.

Julie Carpenter Johnsen, 63kg of Waldorf College started off the day taking on Jennifer Page of Titan Mercury Wrestling Club.  Johnsen lost by fall, which pushed her to the consolation bracket where she received a bye in the next round. Carpenter then faced Monica Ramirez of Lindenwood University where she lost by fall ending her tournament.

Jasmine Bailey, 63kg of Bearcat Wrestling Club (McKendree University) faced Trinity Griffin of Sunkist Kids Wrestling in the first round. Bailey was leading, but lost by fall late in the second period. Bailey received a second round bye followed by a pin over Skyler Grote of Blair Academy. Bailey’s next round ended in a 3-2 win against her McKendree University teammate, and fellow Iowan Cassy Herkelman. In her final round, Bailey faced another teammate, Alexis Porter (New York Athletic Club/McKendree University) and lost by TechFall 2-12, which ended her tournament run.

Cassy Herkelman, 63kg of Bearcat Wrestling Club (McKendree University) received a first round bye followed by a 0-10 TechFall loss to Erin Clodgo of Sunkist Kids Wrestling. Herkelman’s next round ended with an 11-0 TechFall over Hailey Huerta of Oklahoma City University/Gator Wrestling.  As mentioned earlier, Herkelman’s final match of the tournament was a 2-3 loss against teammate Jasmine Bailey.

Rachel Watters, 69kg of Oklahoma City University/Gator Wrestling started her day with a 12-2 TechFall over Anna Naylor of the University of Jamestown. Watters’ next match ended with a pin over Claudia Gallegos of Lindenwood University moving her into the semifinals. In her semifinal match, Watters lost by 0-11 TechFall to Senior World Team member, Tamayra Mensah of Titan Mercury Wrestling Club. Watters returned in the consolation bracket with a 7-3 decision over Lisa Gonzalez of Lindenwood University which moved her into the third place match. In her final match, Watters wrestled fellow Junior World Team member Forrest Molinari and lost a 4-4 decision on criteria. This placed Watters at fourth place for the tournament and qualified her for the Olympic Team Trials April 8-10 in Iowa City which will ultimately determine the 2016 U.S. Olympic Team.

The Iowa women will have several additional opportunities to qualify for the Olympic Team Trails including the Women’s Collegiate Wrestling Association (WCWA) Nationals (top 3), the USA Wrestling University Nationals (champion), the Dave Schultz Memorial (highest US medalist), and the Final Olympic Trials Qualifier (champion) in April of 2016.