Iowa vs SDSU Play by Play 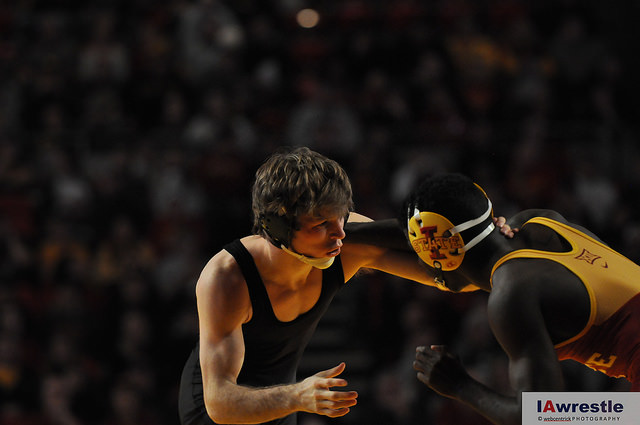 Dual scheduled to start at 7:00 PM, Refresh often for updates.

1st: Gilman with a go behind to a takedown off a snap in the firsst :19 seconds, cuts him right away. 2-0 Gilman, Gilman with another TD in :35. Working the half and getting back points and he’s got that locked up TIGHT. Correction he did have it locked up tight, but Morris slips out, but it’s a 4NF for Gilman, Gilman cuts and hits a go behind within :05. Out of bounds, optional restart. Gilman does a whip over for the fall.

1st: Simms able to get to Cory’s ankle right away and pick it up off the mat, Clark still in a collar tie, but doesn’t drop off his feet and gets the other foot down. Now Clark working his two on one Russian tie trying to work to a front headlock. He has Sims on his knees trying to extend him, but Simms able to circle out to his feet. 1:20 to go. Clark on his two on one and he just tries to pull Simms by and Simms tries to stay parallel, but Clark hooks the ankle for a takedown. They go out. Clark finishes the period up 2-0 with :41 RT
(Little blood at the end of the period for Clark)

2nd: Simms starts down, Simms goes to a sit out and is out, :51 RT for Clark. Cory working the two on one just trying to pull Simms, but this time Simms stays in better position and Clark works to get out front and is now trying to come all the way around for a go behind. Illegal hold for Simms, Clark leads 3-1, :53 to go. Simms tries to do some head taps Cory goes into a shot, but then backs out. Period ends.
(More blood time)

3rd: Clark starts down, gets to his feet right away and Simms can’t hold on and cuts :48 RT still for Clark, he leads 4-1. Simms in on a single, Clark does a good job getting his hips back and works out of the hold and onto their feet. Another single attempt, but Clark gets his legs back and tries stuffing the head. Stalemate :50 left. Simms trying to work Cory’s head, Clark backing away from it and is warned for stalling. Now a shot from far away in a bit of a desperation. Stalemate. :05 left, Clark wins

1st: Both come out trying to work a collar tie, if anything Ryan being a bit more aggressive with the head of Gross. Ryan with a low single and gets the TD, Gross is out pretty quick, 2-1 Ryan with :11 RT. Ryan drops Gross to a front headlock, but they work out of it. 1 minute left, Gross doing a good job of controlling the center of the mat now. Half shot by Ryan, it’s not there,  Gross in on a shot, but Ryan creates a scramble, no points period ends 2-1 Ryan.

2nd:Ryan defers, Gross takes down, Ryan looking for a deep waist to flatten Gross out, but Gross is to his feet and is out, 2-2 tie, :27 RT. FYI Ironside not happy with the escape, thinks Ryan just let him go. Both guys working a collar tie, Gross still working the center of the mat pushing Ryan out to the edge. Gross with a snap, but Ryan able to fight back on to his feet. Another little snap by Gross, now a shot attempt by Gross. Back to their feet, period ends.

3rd: Ryan a little slower off the whistle, Gross throws a leg in and Ryan tries a tripod to shake him off, now Gross able to get Ryan on his hip awful close to near fall points for Gross, Ryan able to fight back to his belly. Ryan tries a roll through, just about caught on his back. Crowd urging Ryan on here in the final :30. Gross has the RT point and has Ryan flattened out. Gross wins with RT

1st: Half shot by Kocer, reshot by Sorensen and he just about gets to the knee, but Kocer uses some underhooks to fight it off. Sorensen now has Kocer in a front headlock, but Kocer gets back to his feet. 1:45 to go. Another front headlock, and Sorensen trying to circle around for the go behind, but Kocer fights it off back to their feet. Ironside’s suggestion for Sorensen is he is being too one dimensional and needs to string two or three moves together. Kocer in on a single, but Sorensen fights it off to the whistle.

3rd: Kocer tries the top position for his choice, Sorensen reversal for 2, and now a suck back for nearfall 2. Sorensen out 7-0 and has RT over 1 minute. Sorensen flattens Kocer out and they scoot out of bounds. restart with :16 left, caution on Kocer. Kocer to his feet off the whistle, but mat return for Sorensen will finish the major.

1st: Cooper has a front headlock, but it is stalemated. Pack tries a shot but doesn’t fully commit, Cooper with another front headlock, stalemated. 2:00 left. Pack tries to clear the hands almost catches Cooper off balance.Pack in on a shot, Cooper able to fight it off and get all the way around behind Pack on their feet, but Pack keeps hand control and gets out. Cooper tries a duck under, almost gets an ankle pick, but misses. Now Cooper with another front headlock stalemated. Cooper tries a shot and just can’t hold on to the leg with :10 to go period over.

2nd: Pack starts down, gets to his feet, but Cooper returns him. Gets to his feet again and Cooper trying to bring him down, but has to cut him. Pack takes another shot and gets a front headlock, but is warned for stalling – stalemate. Pack hits a double and drives Cooper from the center of the mat to finish with dragging his toes to take a 3-0 lead. Restart Pack puts a leg in, Cooper trying to dig it out comes to his feet and gets a big reversal with :10, but Pack gets an escape to make it 4-2 Pack.

3rd: Cooper starts down, caution Iowa. Cooper to his feet and is out. Pack with :07 RT right now. 4-3 lead for Pack. Cooper gets to the front headlock and JUST missed the go behind on Pack. Cooper in again on a front headlock, just misses the go behind. Pack shoots in and gets the leg, it’s stalemated quickly. :50 left. Pack in on a shot Cooper able to get around for a go behind and gets the takedown, but losses his positioning and Pack able to reverse quickly and he wins.

2nd: Burke starts down, up to his feet and trying to dig Zilverbergs’s leg out. He does a standing roll to get his escape, and Zilverberg with :10 RT. 1-0 Burke lead. Zilverberg pops the elbow to a single, Burke fights to try and back out, Zilverberg tries to switch to a double, but Burke able to circle out to get back on his feet. Zilverberg in on a single and brings it to his feet, another standing roll for Burke and grabs an ankle to create a scramble, Burke tries to come out but time expires.

3rd: Zilverberg starts down. Caution Burke. Zilverberg now gets out to the side, but he doesn’t get the escape and they stalemate. Zilverberg gets out, and Burke has :26 RT. I missed a locked hands so it’s 2-1 Zilverberg, double by Zilverberg has a 4-1 lead now. Granby by Burke and he gets his escape and was in a front headlock. Tries a desperation shot, but Zilverberg fights it off.

1st:Ironside was a little surprised it was not Patrick Rhoads at 165 after what he saw at ISU. Nothing doing here in the Meyer match just collar ties and snapping out of them through 1:30. Kocer in on a single, able to come out the back door for a takedown and he leads 2-0. Meyer is out in :21 to make it 2-1. Meyer had a two on one tie up and had Kocer’s elbow on the mat, but was blocked off from a go behind.  Back on the feet tries the two on one again, tries to switch to a single, but missed.

2nd: Meyer takes down, gets flattened out. Meyer gets his base back, Kocer bellies him out again. Meyer trying to come up to his feet and gets his escape, Kocer in on another shot, trying to come out the back door, but Meyer is able to follow this time. Meyer keeps coming around for his takedown now leads 4-2. Meyer finishes the rideout and RT is :21 in Kocer’s favor.
(Bench warning on Iowa)

3rd: Kocer starts down, hits a switch to his feet, Meyer tries to pick him up and return, tries a trip, Kocer comes around and is in on a single, but Kocer never got his escape point. on the edge and it’s stalemated. RT now in Iowa’s favor. 1:14 to go (Bench warning SDSU, Bono wanted an escape for Kocer). Kocer to his feet, takes Meyer a few tries, but he returns Kocer, and drops to a leg, Meyer warned for stalling for riding the leg and they go out of bounds. Meyer now with RT, Kocer to his feet and is able to find a way to return, looks like the coaches are having a little back and for with the stalling. Meyer holds on to win

1st:Two on one to a foot sweep for Brooks and he has an early two looking for near fall and he gets the fall on the edge

1st: Stoll comes out to Darth Vader’s theme song. Love it. He looks much bigger than his opponent.Not much happening, crowd wants stalling for Macki backing away from Stoll, there is the call with 1:20 left.Stoll controlling ties and center of the mat, moving Macki pretty much on a whim. They got out and Macki hit for stalling again. 1-0 Stoll. Ironside agrees with the call. Period ends

2nd: Stoll starts underneath and his out in :05 to take a 2-0 lead. Macki backs out again and stalling on Macki again, 3-0 Stoll. Stoll gets a bear hug trips on the edge and doesn’t get the takedown, but gets another stall point for Macki backing out. Stoll with another bear hug and backing out, stalling and that should be match termination by DQ.