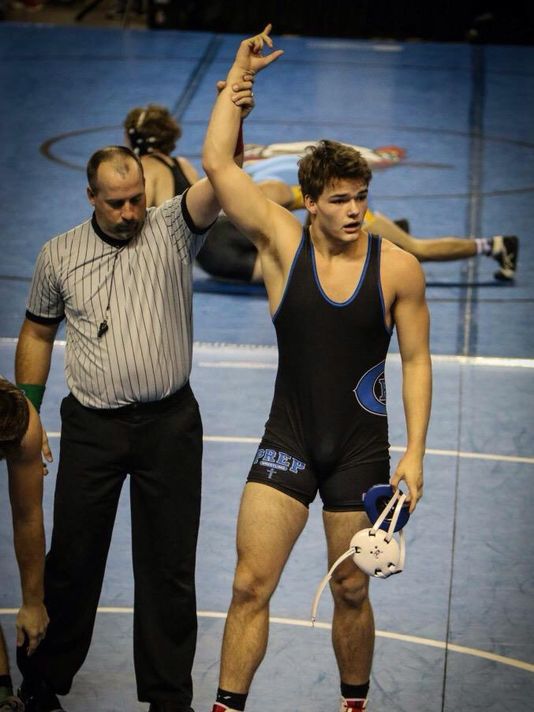 Cade Brownlee was not a name that was on most Iowa wrestling fans radar last week but they are all aware of him now! The Senior from Creighton Prep in Nebraska committed to wrestle for coach Tom Brands and the Iowa Hawkeyes last week after coming to Iowa City on a visit the prior weekend. A year ago this was just a dream after Brownlee didn’t qualify for the state tournament as a Sophomore. However, after a change in training habits he went on to win a state title as a junior and started picking up interest from college programs including the Iowa Hawkeyes. We recently had a chance to catch up with Cade and talk about his commitment.
Thank you for the opportunity to answer some questions.

You made a huge jump from being a solid wrestler as a Sophomore but not qualifying for the state tournament to winning a state title your Junior season. What do you attribute your big jump in success to?

I attended a summer wrestling camp at the University of Iowa where I realized what it took to get to where I wanted to be. I started staying after practices to do more work and also getting up early in the morning and working out before school.

What other schools did you consider before choosing Iowa?

Although my only official visit was to Iowa, I was looking at University of Nebraska-Kearney, Arizona State, Morningside and Hastings College.

What was it about the opportunity to wrestle at Iowa that made this the right choice for you?

Being introduced to the Iowa style last summer transformed my work ethic in all aspects of my life. Also, my family has a history of being Hawkeye fans and it’s always been a dream of mine to make it on the team.

Have you always wanted to be a division 1 wrestler or did you have other aspirations before getting the offer from Iowa? Do you play any other sports?

For a few years I was indecisive on wrestling at the next level or not, but I developed a passion for wrestling and have dedicated myself to it so much I knew that I could not give it up. However, once the opportunity came along from Iowa it did not take long to decide that I knew where I wanted to be. I do not play any other sports.

What do you like to do when you are away from the wrestling mat?

I love having friends over and hanging out with them when I can.

What do you want Iowa fans to know about you?

I want to let fans know that regardless if they know me or not, I’m going to strive to be the best in the room every day and meet our standard. I will be the guy to watch for in a few years.

2 thoughts on “Overtime with Cade Brownlee”