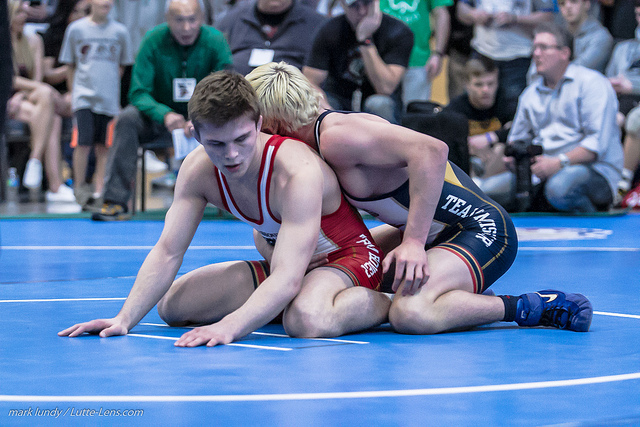 ASICS released their 30th annual All-America selections for the 2014-15 season. The teams were selected by a nationwide panel of wrestling experts, and it is the only national all-star team for which wrestlers enrolled in all four high-school grades are eligible.

Leading the way on the first team are a pair of Iowa Hawkeye recruits Michael Kemerer and Alex Mairnelli. Kemerer is joined by two of his high school teammates on the first team in Devin Brown and Spencer Lee of Franklin Regional. After making the state finals for the fourth straight year, Kemerer captured his first state title by defeating Patrick Duggan in the 145 PIAA finals. In addition to beating Duggan, Kemerer also picked up a win over third team selection Fredy Stroker and second team selection Max Thomsen.

St. Paris Graham’s Marinelli captured his third straight individual state title and was a part of his high school’s 15th straight team title in Ohio. Still only a junior, the future Hawkeye ascended to the #1 spot in his weight class ranking in December after his first Ironman title where he defeated Mason Manville.

Union, Iowa’s Max Thomsen was the only wrestler with Iowa ties on the second team. Thomsen recently ended his storied four team career by becoming the state’s 24th four-time state champion, and he is also the state’s all-time wins leader, hold’s the state’s longest winning streak, and the most career falls. Thomsen is headed just down the road to Cedar Falls to compete for the University of Northern Iowa.

Four wrestlers with Iowa ties made the third team with Fredy Stroker of Bettendorf, Bryce Steiert of Waverly-Shell Rock and Jake Marnin of Southeast Polk leading the way among Iowa natives. Stroker captured his third Iowa high school state title in what was his fourth finals appearance. Stroker has been one of the top wrestlers at his weight his entire career, and will head north to continue his career at the University of Minnesota. Marnin helped his Southeast Polk team capture both dual and traditional tournament titles. In addition to team titles, Marnin captured his second individual state title, and will continue his athletic career on the football field.

Steiert capped off a great senior season that saw his pick up a revenge victory over Bettendorf’s Dayton Racer in the state finals as the Waverly wrestler won his second straight state title. A few months later Steiert knocked off the then #2 ranked 160 pound wrestler Josh Shields in the Dream Team Classic which shot him up the list. Like Thomsen, Steiert will not have to travel very far to continue his college career at Northern Iowa.

The other third team members include California standout and future Hawkeye Justin Mejia. The Clovis native recently captured his second straight high school title as a sophomore, a feat that has only been accomplished a handful of times.