Iowa, ISU Advance One to the Finals, UNI Drops Two 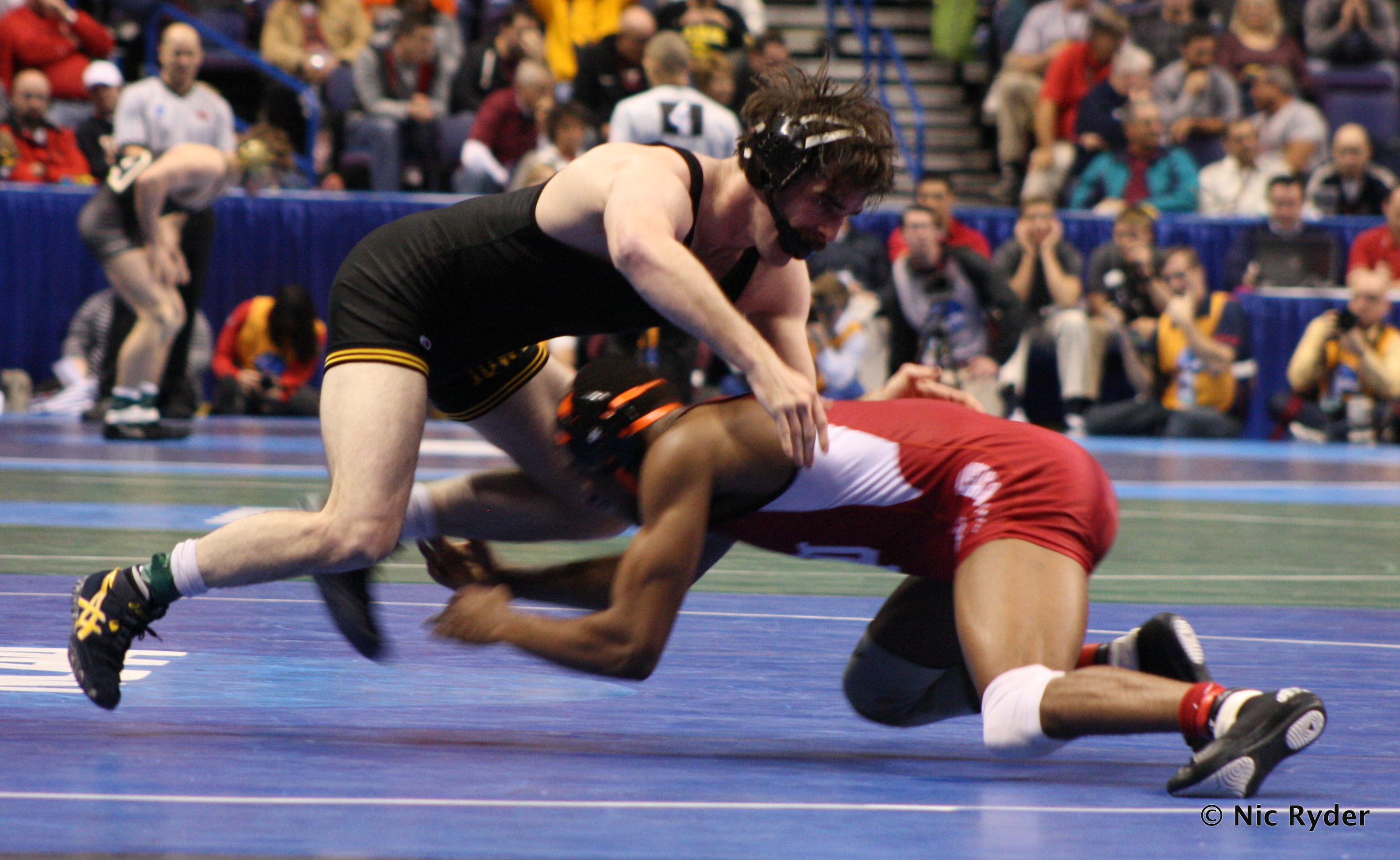 The University of Iowa advanced one man to the NCAA Wrestling Championship finals. Cory Clark beat James Gulibon of Penn State 7-5. The score was 0-0 after the first period but Clark came out in the top position in the second but got reversed, and once he got out he stayed in control.

“I wasn’t able to score in the first period.” Clark said of his match. “When he got that reversal it was really time to go, which, whenever I’m on bottom, I’m usually pretty quick to my feet. Maybe it was a little bit of a wake-up call.”

Clark would get a takedown in the second and third periods, locking up riding time along the way. He gave up a takedown at the end of the third but Gulibon didn’t have enough time to make the comeback.

“He’s a super competitor, he’s a super talent.” Iowa head coach said of Clark. “When he tunes in, to the task at hand, he’s pretty good.”

Clark will wrestle Oklahoma’s Cody Brewer. Brewer came in as the 13 seed and upset the 4, 12, and 1 seeds on his way to the finals.

Iowa State’s Kyvan Gadson made the finals for Iowa State at 197 pounds, defeating Duke’s Conner Hartmann in the semifinals 4-1. Gadson hit a pair of takedowns in the match to win 4-1.

“I thought tonight’s match went all right. Not enough offense on my part,” Gadson said to the media after his match. “It was another step in the right direction, moving forward in the NCAA finals.”

“I wouldn’t say it’s pride. But I think it’s something that I’ve worked for, for a long time. Put a lot of time, energy, effort, tears, smiles, all that have gone into this. It’s not done yet.”

Gadson will face Ohio State’s Kyle Snyder in the finals tomorrow. Snyder upset the number one seed, J’Den Cox, to make the finals.

“I’m just going to do what I do. We’ve wrestled once, that match doesn’t matter, it’s in the rearview.” Gadson said of his upcoming opponent. “What’s important is tomorrow night. That’s where you get remembered.”

Iowa had two semifinalists lose their matches. Thomas Gilman was the first on the mat for the Hawkeyes, facing off against unseeded Zeke Moisey from West Virginia. Mousey came out quick, scoring a takedown in the first 15 seconds of the match. Gilman would earn an escape point but get taken down again, this time leading to a pinfall in 0:52.

Gilman will wrestle Saturday morning at 10am against #2 Nahshon Garrett in the consolation semifinal match.

The other semifinal loss for Iowa came at 174 pounds, where Mike Evans dropped a 1-0 decision to Penn State’s Matthew Brown. It was Evans’ third one-point loss of the year to Brown.

The first two came due to a rideout by Brown in the third period, this time Evans elected to go neutral in the third trailing 1-0. Evans had one attack towards the end of the match that had a chance, but he couldn’t finish. Evans will face #1 Robert Kokesh from Nebraska in the consolation semifinals tomorrow morning.

UNI had two men fall in the consolation bracket, each just one win shy of becoming an All-American. Cooper Moore wrestled #10 Jim Wilson of Stanford, and lost 7-5 in sudden victory. Moore had a takedown in the first period, but couldn’t find enough of that in the second period to get the win.

“Coopers got to continue to attack, that’s the thing that I saw,” UNI head coach Doug Schwab said of Moore. “When he attacked he scored against the guys he wrestled all weekend. And kind of went away from that and it bit him.”

UNI’s heavyweight Blaize Cabell dropped a 4-0 decision to Iowa’s Bobby Telford. Telford took Cabell down in the first period and the much larger Telford rode Cabell out of the period.

“You get taken down and you give up that much riding time it’s tough to beat anybody,” Schwab said. “You have to be able to create more motion and take some more attacks.”

Overall Schwab was obviously not happy.

“There’s not a whole lot to talk about. We have to get better.”

Iowa’s Brandon Sorenson advanced through the wrestle back session. He defeated Sal Mastriani of Virginia Tech by major decision, 9-1. Sorensen then claimed his second win of the evening with a 4-3 decision over Daniel Neff of Lock Haven. Sorenson will wrestle in the consolation semifinals Saturday morning against #5 Chris Villalonga of Cornell.

Iowa and ISU both had men lose on the backside of the bracket during the session as well. ISU’s Earl Hall dropped a 5-2 decision to Lehigh’s Mason Beckman. Beckman then lost his first match against Jade Rauser and has climbed all the way back to the consolation semifinals.

Bobby Telford got two wins on the backside of the bracket, first defeating UNI’s Blaize Cabell 4-0 and then Minnesota’s Michael Kroells 2-0. Telford will wrestle in the consolation semifinals Saturday against Wisconsin’s Connor Medbery

Nathan Burak secured a win over Penn’s Canaan Bethea 10-3 to get his spot on the podium. He dropped his second match of the night, a 6-3 decision to Morgan McIntosh of Penn State. Burak will have #8 Max Huntley in the seventh place match tomorrow morning.

Iowa’s Sammy Brooks suffered a defeat to Arizona State’s Blake Stauffer, 7-2 in the blood round. Brooks finished the tournament 2-2, and came up one win shy of becoming an All-American.