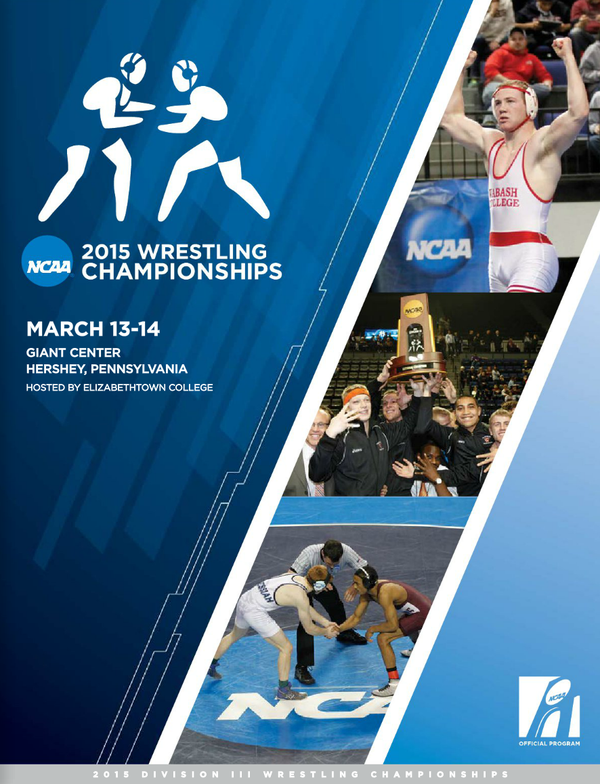 Where: Giant Center in Hershey PA

Jake Agnitsch comes into the weight class with a 25-4 record and grabs the 7 seed. He draws Bobby Jordan of Johnson & Wales in rd. 1. Agnitsch will likely see Lucas Malmberg in the quarterfinals. Malmberg comes in with a 37-2 record and is a freshman. Rosenburg of Coe sees 8th seeded Cole Ferguson of Wisconsin Parkside. Page draws 5th seeded Asher Kramer of Brockport State. Page and Agnitsch both come in ranked 6th and 7th respectively, and have good chances to become All-Americans. Lurking on the top side is top seed and returning national champion Mike Fueffinger of Augsburg.

Connor Campo comes rolling into nationals after a big 11-4 victory over returning All American Evan Obert. Campo grabs the 4 seed and battles Gabriel Foltz of Concordia-Moorehead in round 1. He likely sees 5th seeded Matthew Grossman of Wilkes second round. Waiting on the top half of the bracket is Nathaniel Giorgio of U.S. Coast guard academy. Girogio is undefeated (38-0) and a 2x all American placing 2nd and 3rd the past two seasons. Evan Obert of Luther grabs the 6 seed and will face Eric Harder of Pacific in round 1. Obert is a returning All American placing 8th last season. He likely sees 3rd seeded Jeremy Border of Mount Union second round, who is a returning All American. Nathan Shank of Cornell draws 8th seeded Trevor Pruett of Wisconsin-Whitewater in first round action.

Four different wrestlers with Iowa ties qualify for the NCAA tournament here, all with great chances to become All-Americans. Van Anrooy has yet to lose to division III competition after transferring from Oregon State this past year. He draws Marcus Hamer of Augsburg first round. Former West Des Moines Valley state champion and Iowa State transfer comes into the tournament as the 4 seed. Jones is a two-time division III All American, and squares off against Ben Henle of St.Johns in the opener. Nick Steger (seeded sixth) took his only loss of the season at regionals and wrestles Jake Savoka of Williams College in the opener. Nashid Barrow had an excellent regional, pinning then undefeated Steger in the semi-finals. He opens the tournament against Josh Decatur of Baldwin, and takes the 8 seed.

Wartburg’s Kenny Martin is the lone Iowan to be seeded at 149 pounds. Martin goes toe to toe with Nathan Segal of North Central in the opening round. Martin comes in with an array of upper body attacks that make him extremely dangerous. He likely sees returning All American (7th place in 2014) Luke Lohr of Waynesburg in the quarters. After a nice regional Dakota Gray of Luther wrestles 8th seeded Elroy Perkin Of Wisconsin-Whitewater first round. Trevor Engle of Cornell draws 1st seeded freshman Dan Mirman of John Caroll.

DeWitt comes in seeded 5th after defeating former All American Drew Wagenhoffer in the Central Regional finals. He competes against Ty Herzog of Roger Williams in the opener. Lurking in the quarterfinals is 4th seeded Jon Garrison of Mount Union. Drew Wagenhoffer grabs the 7 seed after completing a 26-6 season. His first round match will be against Sean Byham of Thiel. He potentially sees 2nd seeded Reece LeFever of Wabash in the quarterfinals. LeFevers only loss came at the hands of Wagenhoffer earlier this season. Van Anrooy of Luther wrestles top seeded Nick Carr of Washington and Jefferson first round. Look for a rubber match between Steiert and Sewera potentially in the finals.

Steiert comes in the top seed after defeating then first ranked Sewera in the Central finals. He sees the winner of Ethan Farmer of Wabash and Jesse Bader of Hunter. Sewera grabs the 2nd seed in the bracket and faces Eric Hensel of Augsburg in the opening round. Letney comes in unseeded and draws Nolan Barger of Lycoming in the opening round.

All three Iowans grab seeds in the 174 pound weight class. Welter grabs the 2 seed after a breakout season. He squares off against Sebastian Gardner of Concordia-Moorehead in the opening round. He potentially sees 5th seeded Jordan Newman of Wisconsin Whitewater in the quarters. Hamm battles his way to a 6 seed after winning the Central regional. He battles Tory Cain of Rochester Institute of Technology in the opener. Ryan Harrington of Coe comes in as the 7 seed, and sees Mason Mergener of Concordia in the opener.

DeVillbiss comes in at the 5 seed despite grabbing 3rd at the central regional. His opening round match pits him against Daniel Manganaro of Ursinus in the opener. Lurking in the quarters for him is 4th seeded Christopher Chorzepa of Williams College. Chorzepa finished 3rd at last seasons NCAA tournament.  Peterson comes in as the 7 seed after recently catching fire. Peterson’s talent has never been questioned and he has the potential to place higher than his seed. He wrestles Tom Teigen (Augsburg) first round, and likely sees 2nd seeded Jonathon Deupree (Southern Maine) in the quarters. Ryan Sheldon although unseeded comes in as a returning All American (6th 2014). He draws 6 seed and freshman Ben Swarr of Messiah in the opener.

Roman comes in seeded 6th after a Central Regional Championship. He starts things off against Jared Groeneveld of Alma. 3rd seeded Aaron Karns of Deleware Valley creeps as a potential quarterfinal matchup. Karns placed 4th at last year’s championships. Seabold of Central comes in as the 7 seed after transferring from South Dakota State.  He squares off against the winner of Jonathon Secor of Lycoming and Hunter Ayen of Springfield. Horner comes in unseeded but is a returning All-American and a dangerous wrestler. He faces off against Aaron Karns of Deleware Valley in opener. A potential match between Roman and Horner second round is possible, however Roman has dominated Horner in earlier matches.

Nagle Comes in as the 4 seed in his first season in the Knights starting lineup. Nagles first round matchup will be with Nino Majoy of Heidelberg. Nagle potentially sees Zach Roseberry of Delaware Valley in the quarterfinals. Herman of Luther sees 7th seeded Anthony Edgren of Wisconsin Whitewater in the opening round.

Wartburg comes into the tournament gunning for their 5th straight national championship. Despite a youthful lineup, the Knights put themselves in excellent position with 9 seeded wrestlers. Luther while ranked 16th has big power potential with 3 seeded wrestlers who could make some noise.