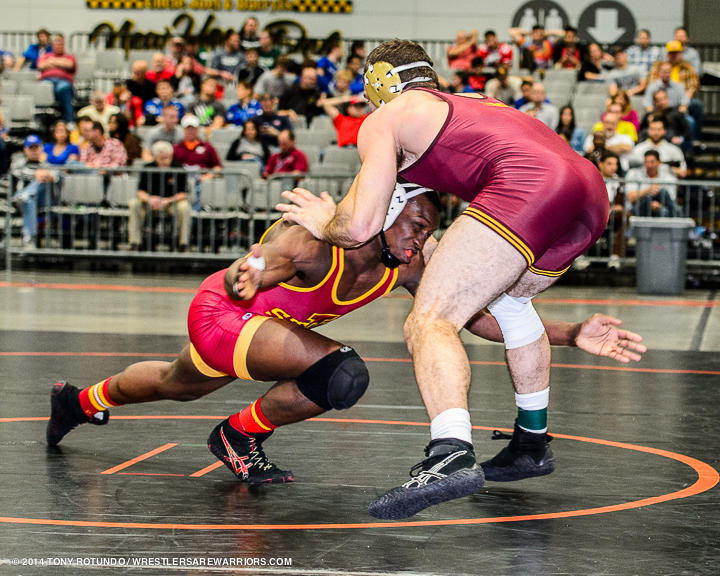 Klimara set the tone early for the cowboys gaining a hard fought 5-3 win over Zeke Moisey. Klimara used  a first period takedown, an escape early in the 2nd and a takedown at the end of the 2nd period in his win.

Hall struck early to gather a 2-0 lead but could not outlast Oklahomas 2x All American Cody Brewer. Brewer quickly escaped and gathered his own takedown leading 3-2 going into the 2nd. Brewer escaped then hit a quick takedown and rode out the entire period. Hall closed the gap to 7-5 late in the match but Brewer sealed it with a late takedown for a 10-5 victory.

Rodriguez came close to scoring early, but Heil Countered for a takedown of his own.In the second period Heil gathered a quick reversal in a wild scramble, only for Rodriguez to escape quickly. Heil then pulled a front headlock, jumped a nearside cradle and took Rodriguez over for the fall.

Tucker pulled off the 8-6 win here in a hard fought match. Of note Josh Kindig took the mat for about a second with Gabe Moreno in the 3rd place match, then walked off. The NCAA says you must compete in your conference tournament to be eligible for an NCAA tournament bid. Moreno also appeared injured leading 5-1 in the 2nd period of his semi-final match, eventually losing 7-6.

Collica won a 3-2 decision on a 3rd period takedown off of a low single attack.

Little action in the neutral position in this bout.Weatherman and Crutchmer traded quick escapes in the 2nd and 3rd period to head into overtime 1-1. Weatherman nearly scored a double leg late in the 3rd but couldn’t finish. The two traded escapes again in the first ride out and were scoreless in the second sudden victory. Weatherman gathered a quick escape but could not keep Crutchmer down for very long. Weatherman nearly had a takedown as time expired but upon review was not awarded a takedown. Crutchmer won the bout on 8 seconds riding time.

In the feature matchup of the night Alex Dieringer controlled from start to finish, racking up 5 takedowns, 2 near fall points and a riding time point in a 14-4 victory. He used an arsenal of outside singles, double legs, and whip overs to control Moreno. Dieringer is ranked #1 and a  returning national champion, winning the 157 lb crown last March. Moreno came into the match ranked #2, an All American the past 2 seasons.

Gadson struck first with a quick single leg. Smith escaped late in the period, and received a stall warning. Gadson quickly escaped to start the 2nd, and received another stall warning for a point. He then took Smith down again for a 6-1 lead. Gadson cut Smith to start the 3rd, and eventually picked up another stall point. Gadson got a quick go behind as time winded down, enough to get the riding time point and grab a 10-2 major decision.

Marsden controlled the action from start to finish, winning a 7-0 decision with 2:24 riding time. Marsden received 2 stalling points and looks for his 2nd All American at the upcoming NCAA Championships.