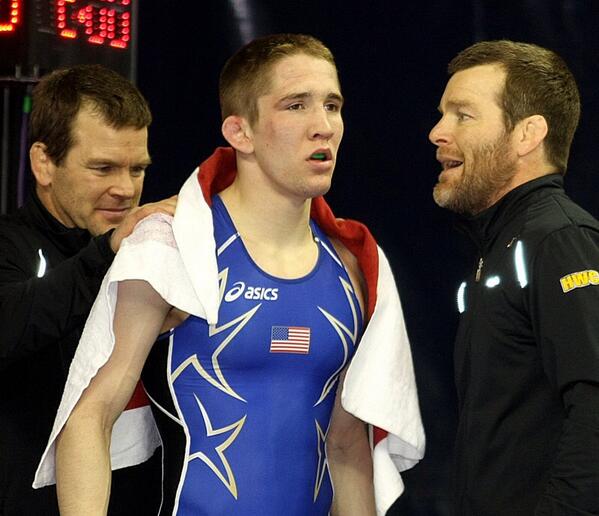 57 kg competition wasn’t enough for former NCAA champion Matt McDonough as he weighed in for his second day of wrestling at the Paris Grand Prix, this time at 61 kg. The move paid off after going 1-1 at 57 kg yesterday, McDonough made it all the way to the semifinals and wound up winning a bronze medal with a fall.

McDonough opened his second day of wrestling with a 12-2 technical fall over Emrach Gasanov to reach the semifinals. There he lost a tough bout with Iman Sadeghikoukandeh 8-3. McDonough found himself on the shot clock with just over a minute to go in the first and Iman was able to capitalize on McDonough’s aggressiveness to get the first score and go up 2-0. McDonough gave up a big move in the second, but was able to come out the backside making the score 8-1. As time was winding down McDonough added his own takedown to finish 8-3 and would wrestle for bonze.

In the bronze medal match McDonough earned a fall over Algeria’s Abderahim Sayeh to secure his hardware.

Phil Keddy represented the Hawkeye Wrestling Club at 86 kg and he lost his opening qualifier match 4-2 to Iran’s Alireza Karimimachiani, but since the wrestler that beat Keddy made the finals, Keddy was pulled back into the repechage. Keddy was unable to get anything going and lost to Poland’s Zbignien Baranowski 2-2 on criteria.

Keddy falls to POL 2-2 in Repecharge.@HWC_wrestling

Former NAIA champion Eric Thompson opened up the tournament with a 10-0 technical fall over China’s Hao Han. Thompson would lose his next match to Azerbaijan’s Jamaladdin Magomedov. Thompson got pulled back into the repechage with Magomedov making the finals, but lost for the second time on the day to Hungarian Daniel Ligeti.

Former Cyclone Cyler Sanderson took 5th on the day. He opened the Grand Prix with a win over Zsombor Gulyas of Hungary. He followed that with a win over host country’s Alexis Malezieux 4-0 to reach the semifinals. There he lost 8-3 to Magomedmurad Gadzhiev (Poland). In the bronze medal match he lost to Ruslan Dibirgadjiyev of Azerbaijan to finish 5th.