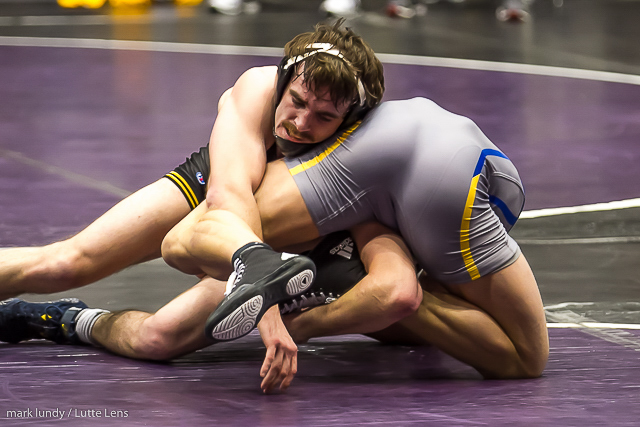 For the second straight weekend the Iowa Hawkeye wrestling team will be on the road to face yet another top ten dual team in the Oklahoma State Cowboys. Iowa will be looking for their first win in Stillwater since 2009, when the Hawks won 20-13. This weekend the Hawkeyes will enter the dual as favorites in eight of their matchups, and there will be two top five matchups.

The first top five matchup will be between NCAA runner-up #2 Josh Kindig at 149 against #5 ranked freshman Brandon Sorensen. Sorensen is coming off a weekend that saw him major his first Big Ten dual opponent and score an upset over a two time All-American. This is a big match for Sorensen could help him solidify his starting role on the team, as junior Brody Grothus may still be recovering from his high ankle sprain he sustained at the Midlands tournament.

The second top five matchup will be at heavyweight where #4 Austin Mardsen will test his mettle against the best in the nation Bobby Telford. Last week Telford notched wins over Connor Medbery, Mike McMullan, Billy Smith, and Nick Tavanello, all of whom are top ten wrestlers. It’s no surprise that Telford was named USA Wrestling’s Wrestler of the Week. Mardsen is coming off an impressive weekend in his own right, defeating Michigan’s Adam Coon (7-4) in the Southern Scuffle finals.

Besides Kindig at 149, the Cowboys will also be favored at 165 where NCAA champion (at 157) Alex Dieringer will take on #9 Nick Moore. The Hawkeye 165 pound wrestler is coming off one of the roughest stretches in his career, as he has lost three of his last five matches all to opponents that were ranked below him.

125 should be an interesting match between Thomas Gilman and Edward Klimara, with the pair squaring off on four different occasions in the past two years. Gilman has won every meeting (6-4 SV and 5-2 as a true freshman, 5-2 and 4-2 last year) though he has never blown Klimara out. In his past two matches against ranked opponents (Dance and Tomasello) Gilman hasn’t registered a takedown so you would like to see him get to his offense, especially in the first period.

Cory Clark will be the heavy favorite in his match at 133 against Brian Crutchmer and it may be a scenario for him to try to score some bonus points for the Hawks. Clark ranks second on the team with seven falls (Telford with nine). Gary Wayne Harding also may be an option at this weight for the Cowboys, but it remains uncertain if they have actually pulled the redshirt on the freshman or not.

Josh Dziewa (141) will squre off against #20 Dean Heil, who is coming off an 8th place finish at the Southern Scuffle. Dziewa will still be a fairly large favorite in his match, and after getting roughed up by #1 ranked Logan Steiber last weekend, this would be a good weekend for Dziewa to get back on track with a big win.

Mike Kelly makes his first appearance in the 157 ranking and he will face off against Anthony Collica. On paper these two should be evenly matched (only two spots apart in the rankings). Kelly had a pretty good performance last week taking 3rd at the Midlands and then defeating a returning All-American, before ending last Sunday with a loss in Columbus. This will be a good opprotunity for Kelly to get back on track as well

Mike Evans (174) and Sammy Brooks (184) will each have a couple of matches against top 15 opponents in Kyle Crutchmer and Nolan Boyd. Brooks will be a threat to score bonus points with his aggressive style (he scored a pinfall against Rutgers off a tilt), in fact he was the only Hawkeye to register a first period takedown against Ohio State.

Now with his redshirt officially pulled Nathan Burak will be in search of win No. 50 against Austin Schafer at 197. Burak notched a top ten victory on Sunday when he defeated Ohio State’s Kyle Snyder. I wouldn’t rule out the chance that junior Kris Klapprodt getting a potential start (because you never really know do you?) which would make the match a lot more competitive with Schafer.

Iowa is a team of extreme balance so even though the dual is in Stillwater and we all know upsets can occur, Iowa can start a dual at virtually any weight and have a top ten wrestler ready to step up and put an Iowa win on the board.