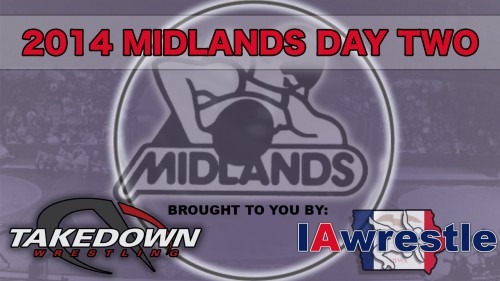 As mentioned on Saturday’s preview post, Takedown radio will be providing live commentary of the 52nd Midlands Championships. Below is the link for the stream, and we will work to keep results updated as best we can. Big thanks to Takedown Radio and Scott Casber for helping to make this happen!

Thomas Gilman (125) and Mike Evans (174) will look to reclaim their Midlands title tonight (BTN coverage starting at 7:00 PM). Gilman will go up against All-American Joey Dance of Virginia Tech in was one of the biggest matchups that was talked about when the seeds were announced. Dance checks in at #6 in InterMat’s rankings, and will be Gilman’s toughest match ranking-wise this season.

Mike Evans will defend his title against Illinois wrestler Zach Brunson who has climbed into the top ten ranks after wrestling at 157 a year ago. This is also a matchup which features the top two seeds.

Hawkeye’s Cory Clark (133), Nathan Burak (197), and Bobby Telford (285) will be in search of their first Midlands title. Clark will also face an Illni in Zane Richards. Richards upset #1 ranked AJ Schopp of Edinboro in the semifinals. Burak has reached the finals for the Hawkeyes after entering the tournament unattached. Burak will see Big Ten foe Tim McCall from Wisconsin. Finally, Telford will look to close out his Iowa career with his first Midlands title in his third attempt. This time he will have to do it against his nemesis since high school, Mike McMullan of Northwestern.

It is uncertain if Brody Grothus (149) will wrestle tonight for 5th after he medically forfeited his consolation semifinal. Grothus lost a tough semifinal against returning NCAA champion Jason Tsirtsis, and may have sustained an injury to hold him out.

Grand View’s bright spot this week was NAIA champion Brandon Wright, who came into this tournament and took 7th place at 141. Wright defeated several division one opponents along his great tournament run.