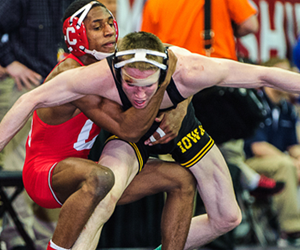 As we noted last week, Matt McDonough, the third place finisher at 57 KG at the World Team Trials has exercised his option to challenge the University World Team member in a best-of-three wrestle off in Arizona. McDonough’s opponent is none other than Nahshon Garrett, who was the first wrestler to hand McDonough a loss at the NCAA tournament outside of the finals. McDonough and Garrett are 1-1 lifetime against each other.

USA wrestling announced yesterday morning that they will be carrying a live stream of the challenge matches, as Tyrell Fortune and Dustin Kilgore will also look to try and take the spots of University Nationals champions Austin Mardsen and Chad Hanke respectively. The matches are expected to begin at 2 P.M. CT

In case you forgot to tune into the Big Ten Network at 6:30 tonight as Tony Ramos will try and claim the Big Ten Athlete of Year. Wrestling national champions Logan Stieber, Jesse Delgado, Jason Tsirtsis, and David Taylor are among the other male nominees.

Team USA’s link to their YouTube channel to watch the matches here.