Gable the GOAT: How I Made It 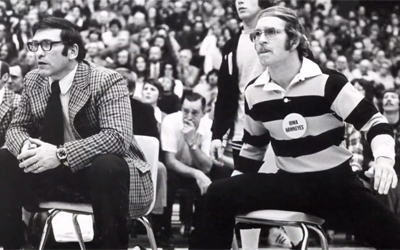 Dan Gable is the most successful wrestling coach of all time.  During his 21 years as the head coach at Iowa, Gable won 21 Big 10 championships and 15 NCAA team championships, including nine in a row from 1978 – 1986.

Even more impressive is that Gable and the Hawks are a comeback story. Yes, the Hawks were removed from the throne as the kings of college wrestling from 1987-1990, where Iowa finished 2nd, 2nd, 6th and 3rd at the NCAA championships.  During those years, we see Gable reflect, improve and bring Iowa back to college wrestling greatness by dominating the 1990’s era of wrestling.

I grew up an hour from Iowa City and was crazy about wrestling, and downright obsessed with Gable and Iowa wrestling.  Recently, I turned that obsession into a story via my podcast, Wrestling Changed My Life.  More specifically, I produced and directed a podcast documentary on how Dan Gable created a wrestling dynasty at the University of Iowa.

This article takes a behind the scenes look at how the documentary was built.

Podcast documentaries are a relatively new form of entertainment.  They coincide with the rise in podcasts and are like traditional documentaries (i.e., film documentaries) without the visuals. It’s purely audio. The first time I listened to an ESPN 30 for 30 podcast, I was hooked and wanted to produce a podcast documentary on Gable.

The idea had been percolating in my mind for about two years, but that was it. An idea that I knew would be cool to act on, but never did. Until I turned 30 this past May.  I’m not really sure what happened but soon after that I found myself obsessed with the idea of making the Gable documentary.

On Sunday June 23, I finally decided that I couldn’t continue pushing the Gable documentary to the background.  Around 10pm I started researching and outlining the storyboard. I stayed up until 1am, took the next day off of work, and continued the research.  I bought any Gable book that I didn’t already have and watched countless hours of Gable interviews on YouTube. After a week or so of research and 700 3”x 5” index cards later, I had my “outline”. I use quotations because the outline would change at least 15 times over the next couple of months.

The next step was to schedule interviews with key figures who were integral to the story.  IN total, I conducted over 21 interviews with the likes of Randy Lewis, Barry Davis, Lee Roy Smith, Mike Chapman, and of course, the big man himself: Dan Gable.

The Gable interview is still something that I can’t believe happened.  The interview took place on Friday August 30. Once again, I took the day off work and made the trek to Iowa City. Along the way I also made stops to interview Barry Davis, Tom Brands and Mike Chapman.  The coolest part about interviewing Gable was that he was exactly as you’d hoped he’d be: intense, funny, exciting, and full of wrestling stories. To this day, interviewing Gable is one of the highlights of my life.

After the interviews were wrapped I somehow needed to parse through over 20 hours of audio interviews and pair it with the live, archival footage (e.g., NCAA footage, IPTV footage, etc.) to make the listener feel as if they were actually at the event. A huge thank you to Jody Avirgan with ESPN who advised on how to tackle this step.  Thus, the post production phase had begun. I used a tool to transcribe the audio interviews to text, pulled out my stack of index cards and began building a story. It took approximately 6 weeks until the storyboard and script were complete.

Then, the real fun began: putting the narration, first-party interviews, archival footage, and music together in the editing tool. This step was by far the most fun of this entire process (aside from the actual interviews). After many late nights and long Saturdays, on Monday November 4 we had a respectable working draft.  I can’t thank the 15+ die-hard listeners of the Wrestling Changed My Life podcast who listened to early drafts to provide feedback (all of which was crucial in getting to the finished product) and ideas.

The next two weeks were focused on refinement and making tweaks to improve the audio quality, flow, context, and emotional impact of each scene.  I can’t thank my brother (Tanner Warner), cousin (Lake Watters), Andrew Stanfield and Mike Chapman enough for their help during this phase. Mike served as our fact checker (the guy is a wrestling historian), and Andrew was instrumental in plugging gaps in the story and serving as a sounding board.

Finally, on Monday November 18, Gable the GOAT (Greatest of All Time) Part 1 was released.  It was incredibly exciting but also a relief because there are so many wrestling stories to tell in this new medium – podcast documentaries.  After Part 2 of Gable is released (Mid January) I’ll continue creating podcast documentaries on our favorite moments in wrestling. I’ll also say that the feedback and support from the folks who have listened has been incredible and I can’t thank everyone enough.

To follow our podcast, go to WrestlingChangedMyLife.Com. The Tom Brands, Troy Steiner and Brent Metcalf episodes are three of the most downloaded episodes that we’ve done.