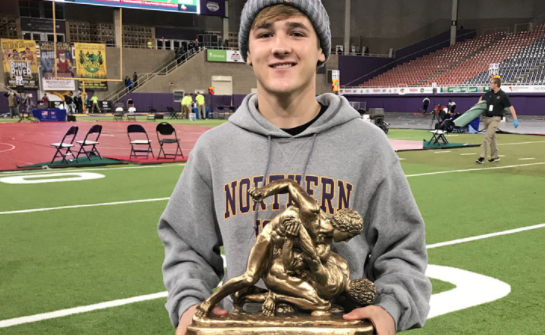 Bennett scored the first takedown on a counter, and never trailed, controlling the action on the way to a 5-1 win over Colt Newton of Choctaw (OK) in the finals at 126 pounds. Bennett, a UNI commit, beat three ranked wrestlers on the way to the title.

The finals at 120 pounds was among the most competitive of the night, with Kyle Biscoglia of the Ubasa Wrestling Academy (IA) scoring a takedown in overtime to defeat Austin Franco of Niles (IL), 6-4. Franco took the lead with two early takedowns, including one on a spladle, but Biscoglia battled back to tie it up in regulation.

Another dominant performance in the finals came at 220 pounds, as Hunter DeJong of MWC Wrestling Academy (IA) just missed a technical fall, stopping Matthew Dunkelman of Thompson Valley (CO), with a 14-0 major decision. Right off the whistle, DeJong scored a takedown and a three-point near fall for an early 5-0 lead. He added two more takedowns and two more near falls, along with an escape, to shut Dunkelman down.

A third-period escape was the difference as Michael Baker of Red Lion Wrestling (OH) edged Zach Ryg of IAWC (IA), 3-2. Baker scored a first-period takedown, and Ryg got the reversal to end the opening stanza at 2-2. No points was scored in the second, and Baker closed it out with his late escape. Ryg was a USA Wrestling Preseason Nationals champion last year in the 9th-10th Grade division.

At 113 pounds, Matthew Ramos of Colt Wrestling (IL) dominated the entire match, on the way to an 11-2 major decision over Jordan Strmiska of 3F Wrestling (TX). Ramos scored the first two takedowns, added a three point near fall, and kept on the pressure throughout, scoring in every period.

At 138 pounds, Saul Ervin of Union County Wrestling (KY) scored the first-period takedown, added a second period escape, then scored a three-point turn while on top in the third period to shut out Jacob Dado of Marist HS (IL), 6-0

Antwaun Graves of Western Wrestling Academy (IN) scored a takedown in every period, giving up only a takedown and a reversal, on the way to a 7-3 decision over Dalton Lakman of Foothill Palo Cedro (CA) at 145 pounds.

The finals at 152 pounds was determined by one move, as Cayd Lara of Team Valley (IA) locked up a first-period cradle for a takedown and two-point near fall, the only scoring move in his 4-0 shutout over Harlan Steffensmeier of Ubasa Wrestling Academy (IA).

Scoring the only takedown of the bout, Cory Peterson of De Smet Jesuit (IL) broke a 2-2 tie in the third period with an escape to defeat Alex Cramer of Poeta (IL), 3-2 at 160 pounds. Peterson’s takedown came on a first-period sweep single, but Cramer responded with escapes in the first and second period to tie it at 2-2 after two periods. Cramer could not ride Peterson in the third, and couldn’t score on his feet late in the match.

Parker Keckeisen of the Askren Wrestling Academy (WI) scored an overtime rideout to edge Troy Fisher of Goddard High School (KS), 2-1 at 170 pounds. There was no first-period takedown, and Fisher escaped in the second period, matched by Keckeisen’s third-period escape for a 1-1 tie at the end of regulation. After neither wrestler scored in sudden victory overtime period, it went an ultimate tiebreaker, a final 30-second period. Keckeisen was on top, and was able to ride out Fisher to secure the deciding point.

Scoring in every period, Brandyn Vantassell of the Champion WC (UT) won a solid 6-1 decision over Cormac Kane of the Conant Cougars (IL) at 182 pounds. Vantassell had takedowns in the first period and the second period, and added a third-period reversal, only allowing Kane a late escape.

The champion at 285 pounds was Daniel Ausloos of Oconto Falls (WI), who broke a 2-2 tie with a takedown to edge Jacob Knutson of the Crestwood Cadets (IA), 4-2.

There was no finals bout at 132 pounds. In an all-Illinois final, Izzy Style School of Wrestling teammates Joe Bianchini and Real Woods were paired off. Woods, a 2016 Preseason Nationals champion, did not compete due to a medical forfeit, and Bianchini was awarded the title.

In addition, champions were crowned in the high school 9th-10th Grade division. Among the champions was 2017 Cadet World Team member Dylan Ragusin of Izzy Style School of Wrestling (IL), who scored a 13-5 major decision over Jaxson Rohman of Fox Lake WC in the 113 pound finals, 13-5.

The event was broadcast live on TrackWrestling, and archived footage of all the bouts is available.

Tomorrow, the USA Wrestling Preseason Nationals continue with the youth divisions, from 8th grade and below, as well as the Girls High School division. These matches will all be broadcast by Trackwrestling.