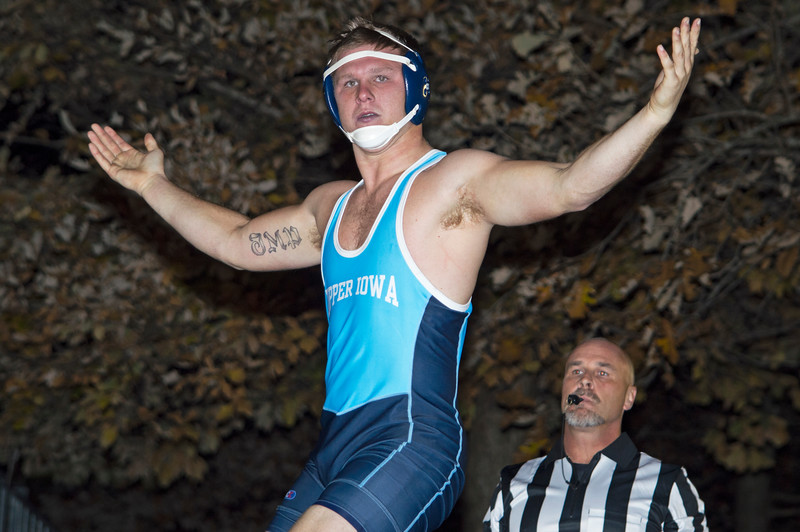 The Peacock wrestling team welcomed the Bulldogs of Truman State University for the Showdown at Sundown in Grace Meyer Square on the campus of Upper Iowa University. In front of a large crowd the outdoor dual began at dusk and ended with a 34-3 win for Upper Iowa to open the 2016-17 season. The Peacocks used five bonus-point wins including a trio of pins and a pair of major decisions to fuel their victory.

The dual began at 125 pounds with Maleek Williams (#7) posting a 13-8 win over J.J. Dorrell.  Williams scored two takedowns in the opening period and added a third in the second frame.  The redshirt sophomore took a 6-3 lead into the final period; the third period was full of action as Dorrell scored another escape and his first takedown and Williams picked up a pair of reversals. A final takedown and ride time point gave Williams the five-point decision.

Chase Seaney made his varsity debut for the Peacocks at 133 pounds against Caleb Osborn. After a scoreless first period, Osborn closed out the second period with a throw for a takedown and four nearfall points.  Seaney scored a late reversal in the third period, but dropped the match 7-2 after a ride time point went to Osborn.

With the match tied at 3-3, the dual moved to 141 pounds featuring a bout between Hunter Slifka and Rafael Lopez. Slifka scored the first point of the match in the second period with an escape from the bottom position. Lopez tied the score with an escape of his own in the third period and added a takedown to move out to a 3-1 lead.  Slifka scored a reversal and a takedown around an escape by the Bulldog wrestler to grab the 5-4 victory and give UIU a 6-3 lead.

Damian Penichet (#1) toed the line in the 149-pound match against Joe King. Penichet scored a takedown in the early going of the first period and then added four nearfall points after a long fight by King.  The redshirt sophomore took his 6-0 lead into the second period and added a takedown to push his lead to 8-0. An escape, a takedown and a final ride time point gave Penichet the 12-0 major decision and UIU a 10-3 lead.

UIU turned to Zak Benitz (#8) in the 157 pound match against Zach Taylor. Benitz made the most of his move up a weight class in the offseason picking up a win by fall (1:17).  The 2016 NCAA Qualifier at 165 scored an early takedown and worked his position into UIU’s first pin of the season.

Nick Georgean (#10) got into the circle next against Dustin McClintock with the home team leading 16-3. The Erie, Ill. product scored a takedown on a hip toss to the delight of the home crowd. A pair of escapes for McClintock tied the bout, but Georgean took a 4-3 lead into the final period with a late takedown. After a long ride by McClintock, Georgean put the match away with a reversal to win by decision 6-3.

Colbey Vance took on Steven Serbinski in the 174 pound match, and after a scoreless first period the Peacock redshirt senior got an escape to scratch the scoreboard first and added a takedown in the second period on the way to a 5-0 decision giving UIU their fifth straight win and a 22-3 lead.

Redshirt senior Dalton Westerlund (#6) climbed the stairs to the mat for the 184-pound bout against Aston Mutuwa. With a minute remaining in the first period, Westerlund scored a takedown and then kept pushing on top until he got the win by fall (2:56) with four seconds remaining in the opening frame pushing the home team’s lead to 28-3.

Fresh off a rushing touchdown five days ago in Upper Iowa’s final football home game, Ryan Parmely (#5) got on the mat against Jules Joseph in the 197 pound match.  Parmely will be back on the gridiron on Saturday when the Peacocks take on the #4 Cougars of the University of Sioux Falls. On the mat, the true sophomore posted a late takedown in the opening period. The Delhi, Iowa native started the second period on top and worked until he found himself in position for the pin (4:00) midway through the period.  UIU’s third fall put the home fans on their feet and gave the home team a 34-3 lead.

In the final match of the night, Logan Hopp made his return to the mat for Upper Iowa after a year off due to injury. Hopp’s last match was in the NCAA Championships in 2015. The New Hampton, Iowa product scored an early takedown on Austin Dovin that got a large rise out of the crowd. Hopp added a second takedown and took a 4-2 lead into the second frame. Hopp picked up an escape and a takedown to push his lead to 7-3 heading toward the final frame. A takedown, two separate four-point nearfalls and a ride time point gave Hopp an 18-4 major decision and Upper Iowa the 38-3 win.

The Peacocks will head to Rochester, Minn. this Saturday, Nov. 5.  Upper Iowa will be competing in the RCTC Yellowjacket Open.