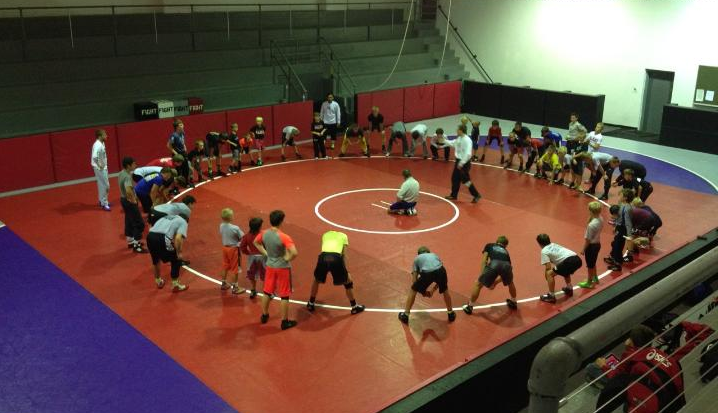 Big names in wrestling are embarking on Iowa this summer, and traveling to Elite Takedown Club in Waverly, Iowa. Every weekend leading up to Fargo will feature a different camp and different set of clinicians. Jaime Gray and Jake Agnitsch, two Wartburg College alums, operate Elite Takedown Club. “I think the growth we have seen over the past two years in the building is incredible. Countless parents and friends have helped shape what we see today, but the best part is being able to do anything we want. People will come to us with ideas and there really isn’t a hurdle that we have to jump through. Pretty much anything can get done,” notes Jaime Gray.

The 60,000 square foot facility is comprised of a wrestling room with lockers and showers, twenty-four fitness center, two court gymnasium, two floors of group suites to house athletes, dining hall, kitchen, auditorium, and numerous lounges. Additionally, the first floor retail development also includes a dance studio and apparel shop. “When you think about it, we have it pretty good. We are in an area that is passionate about wrestling, and despite the population, still seems to churn out some of the best wrestlers in the country year in and year out,” explains Jake Agnitsch.

Over the past two years, some of the best wrestlers and coaches in the country have migrated to Elite Takedown Club and taken part in camp. Kyle Dake, Brent Metcalf, Logan Stieber…just to name a few. The upcoming summer camp series looks to follow suit with the likes of John Smith, Tom Ryan, Doug Schwab, Ryan Morningstar, Cory Clark, Lee Roper, and Jay Borschel all set to visit. “We are excited for the opportunity to expose athletes to these wrestling idols, but we are also excited to continue to learn for ourselves from these same clinicians,” states Jaime Gray.

Information can be found at: