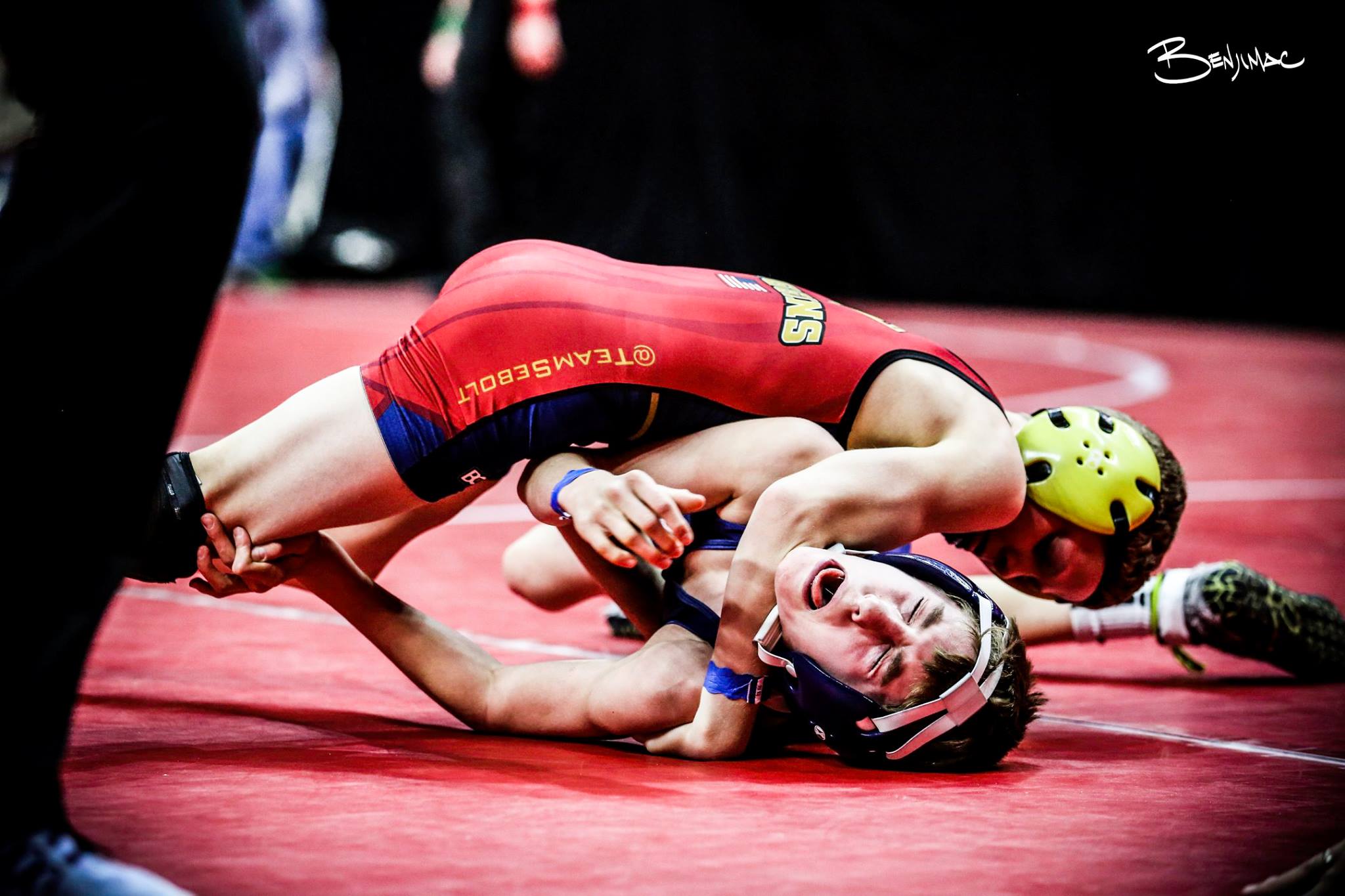 By Jennie Koenig for IAwrestle

Have you considered signing your kid up for wrestling, but are unsure? Parents, can I just take a minute to convince you to have your kids give it a try?

Before I begin, let me just say that I do not wish to insinuate that every kid should wrestle.  There are plenty of ways to learn and grow as a person besides this sport.  Each child is unique, and will learn in unique ways about how to live life.  For some, music may be the discipline that carries them into responsibility.  For others, basketball.  For still others, math.  But our job as parents is to figure out what will help our children learn the valuable life lessons they need before we send them out the door as adults. That means encouraging them to try things so they can find a passion.  To find a fit.  So, more than anything, I encourage you to find that thing.  And maybe you’ll find out that wrestling is it. But there’s only one way to find out.  Try it.

Nope, I am not a wrestler. Nor have I ever been.  Truthfully athletics were never my thing.  I get a standing ovation from my family on the rare occasion that I catch something that’s thrown to me.  I find my passion in writing, music, and books.  In studying religion and history and everything that goes with that. But as the girlfriend of a wrestler, a manager who had to breathe in that sweaty disgusting wrestling room smell every day at practice and keep score for each and every match, the wife of that same wrestler who is now a coach, and the mom of an 11 year old son who’s been obsessed with the sport since he could talk, I want to encourage parents to sign their young men (or women!) up for wrestling this year. And here’s why.

It’s not fun. I hear my husband say this all the time.  You get pushed to the max physically and mentally.  If they created a fitness program called, “Wrestling Practice” and a hundred people signed up I would be willing to bet that 95 of them would go running back to their CrossFit gym because it’s easier.   So. Much. Sweat.  So much.  So much that it actually creates humidity in the room.  Yep.

Have I convinced you yet?

OH, I forgot. Although the wrestler’s match outcome does affect the team’s overall score, wrestling is an individual sport.  It’s all on you. If you get a penalty, it’s because you locked your hands. Nobody else can be blamed. You walk out on that mat by yourself in front of a whole crowd of people to face an opponent alone.  Nobody is going to help. Nobody else is going to make the move. If you’re a bad sport, the whole crowd sees it.  If you’re unfair, everybody knows. Coach knows.  Have fun with that discussion after practice.

Don’t forget you have to make weight.  In wrestling you wrestle in a weight class.  Before each meet or tournament you have to weigh in.  If you’re over, at all, you can’t wrestle.  Period. End of discussion.  So you have to learn to get to weight and maintain it.  Which means you have to cut out the crap food.  And you have to eat portions.  The good news is there are strict standards that coaches must follow to make sure athletes aren’t doing this dangerously, but it still isn’t exactly, “fun”.  They will have to be disciplined.

And as a parent, it won’t be all sugar and roses either (I don’t know if that’s a thing people say. But it is now.) Watching your son lose a wrestling match is pretty much as difficult as watching a lion pick off a baby gazelle on the discovery channel.  Every single fiber of your mommyness will want to run out on the mat and save your baby.  There will be bloody noses, bruises, and pulled muscles.  It isn’t pretty.

So why on EARTH would you sign your kid up for Wrestling?

Because every single moment of it is worth it.  All that work builds a mental toughness that you can’t beat. I see that applied every day. My husband doesn’t quit. Still. When life gets tough he stays focused. He is patient because he knows to wait for the right moment to make his move. He is steady. He doesn’t give up. If it gets tougher he works harder. He saves his energy for the last round. He’s committed. He is fair. He works hard to earn his share and he will put his heart and hands to work at any moment for a friend. He knows that if he wants to succeed, he has to work for it, and nobody else can do it for him.

From the mom perspective I see it too.  It’s not easy to watch my son losing a match. His eyes are searching for a way out. Every single part of my heart is crying out at me to intervene and stop it. But deep in my heart I know that those moments are teaching him to think. To fight. To do everything he can to keep his back off the mat. Nobody can help him. It’s all up to him. So he fights. Or he gives up. Or he’s just plain beat. But no matter what, he made the mistake. He wasn’t quick enough. He quit. He was outmatched.

But then, when I see him win, I get to see the pride in his eyes that says “I earned this.”  And nobody else did it for him. He trained. He studied. He pushed himself. He won.  He will stand on that podium black eye bloody nose and all and be able to say he did it.

And beyond all that, wrestling teaches him to be fair. It is the old fashioned idea of a good clean fight. And when it’s done it’s done. If you lost you lost and if you won you won. You shake hands no matter how angry you are after a loss, or you reach down to lift up the opponent you just beat.

Don’t despair though, wrestling has its enjoyable moments too. It is fun to watch.  Close matches are exciting.  Even if it’s not someone you know wrestling.  You’ll love to cheer for your team and the more you watch matches the faster you’ll figure out what it means when everyone suddenly jumps to their feet and yells, “TWOOOO!!!”

Your kid will be a better athlete in the other sports they play, too. That’s for sure.  Knowing my son can brawl in a fight without ever throwing a punch, knowing he could pick up a kid twice his size like he has to in practice, that gives me confidence that he can defend himself if ever he needed to.

And don’t forget about the families that you grow close with during the season.  You won’t be the only one cheering for your kid, I can promise you that. Plus, there’s a team of coaches that really care about your kid.  They want to win, of course, but they know that everything I listed here is what they want to instill in their wrestlers.  They will push them to be better every single day. If you think your kid isn’t “tough enough” for this, I promise you, they will be.

Yes, wrestling is hard. Very. But so is life.  And I can’t think of a better way for my son to learn what it means to be tough and steadfast, to be fair, to own his mistakes, to see things through to the end, than this sport.

So parents, I hope you’ll consider encouraging your kids to wrestle this season. If you let these coaches work with them, I guarantee you’ll see what I’m talking about.  And when they come up to you mid-season and say, “I hate this. I want to quit!”, I hope you’ll have the strength to say, “you’re going to finish what you started this season. Then you can decide.”  Because you wouldn’t think sweat and blood and all those hours would draw them back, but I’d be willing to bet that this time next year, they’ll be on that mat again.

Cover photo by Ben McDonald. All other photos were provided by Jennie Koenig