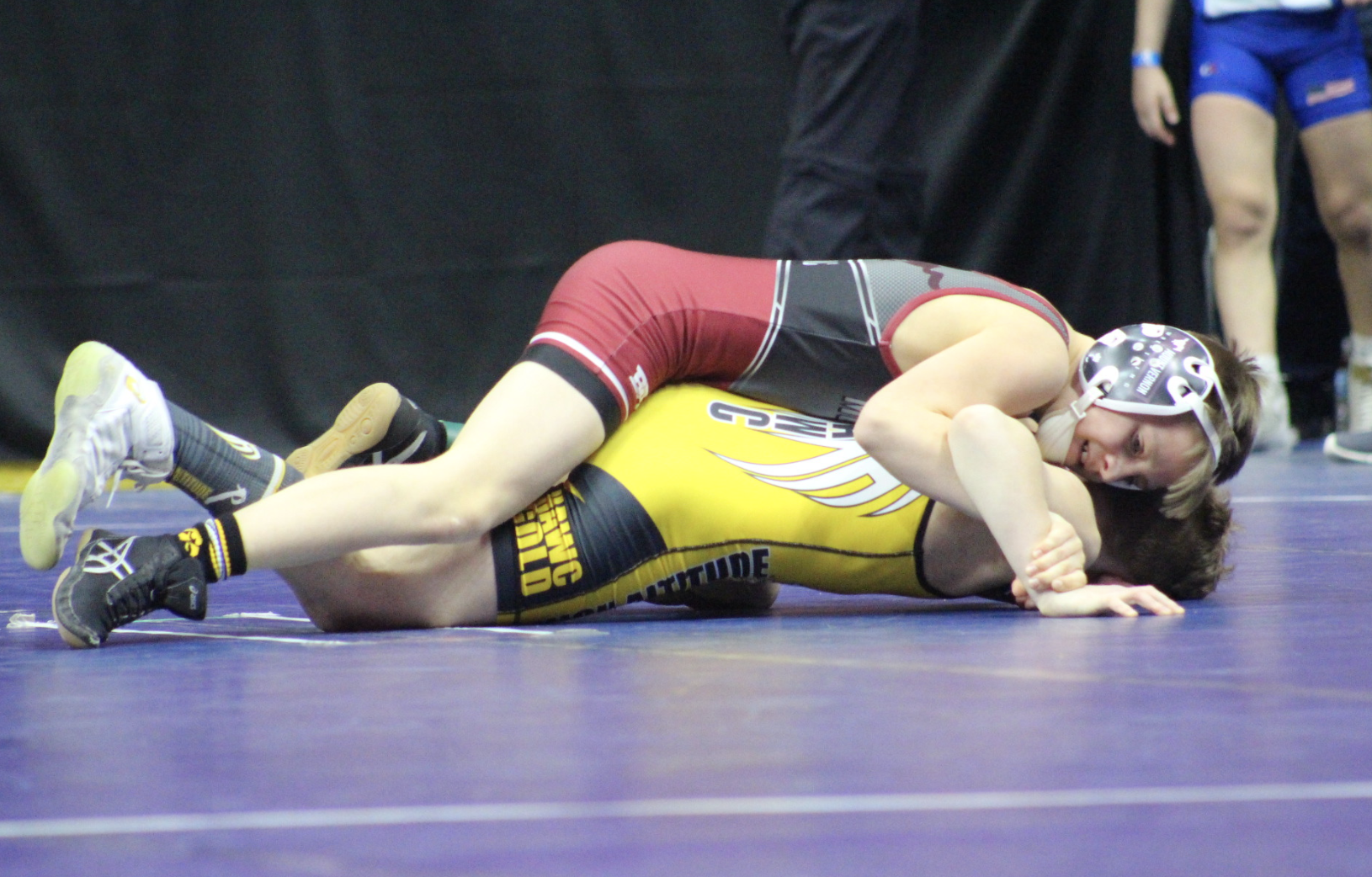 Last year, my son Silas, a 4th grader at the time, got his first champion medal. He worked hard for it. He had won 2nd place or lower over, and over, and over. And then, finally, he got to stand on that champion spot on the podium.

This year, he has taken wrestling more seriously than ever. He seems more focused, more confident. He’s been wrestling since preschool (before that if you count the stuffed animals he pinned when he was a toddler). He’s watched his dad coach since he was born. Everything seemed to be building up to him doing very well this season. But so far, that hasn’t happened. He has lost almost every match he’s wrestled. Seeing his face after one particularly quick pin had me a bit nervous. Maybe we aren’t giving him enough opportunities to gain experience? Maybe we aren’t pushing him like he wants to be pushed?

When I asked him about how he was feeling about wrestling this season, I wasn’t sure what he’d say. I wondered if he’d say he hated it, or that it was too hard this year. But he didn’t say anything like that. He said, “It’s going great.”

Do you know why he said this? Because his mentors have taught him how to lose, and how to get back up.

So many kids quit wrestling after a bad loss. And that is truly unfortunate. Although the goal of a wrestling match is certainly to win, this childhood season of wrestling is about learning the fundamentals of the sport. Kid’s wrestling is a foundation-building era. This is the time when a child learns how to use a wrestling move so naturally that when it really counts they will use it correctly every time.

Losing can be embarrassing and frustrating. But Silas won’t know how to get out of that cradle if he’s never given up back points to one. He won’t learn to keep his shoulders off the mat if he’s never fought for 30 seconds waiting for the whistle.

I think the biggest reason so many kids quit wrestling is because they don’t win. So they think they aren’t any good at it. And losing just isn’t fun. But winning is not the priority at this age. The goal, certainly. But not the priority. Building the foundation is the priority. They need to learn the basic moves, perfect them, and then build on them. They need to learn what “up, down, defer, neutral” means. They have to lock their hands and get called and learn to not do it again. You can’t just lie there; you’ll get a stalling penalty. They need to know that. They need to know how to score points, not just pin a kid. Then of course there is the lesson about being a good sport, taking a loss well, shaking hands and walking away with dignity. There is much more to wrestling than winning

If you’ve watched your son or daughter leave that mat feeling much more than defeated, you have a responsibility to teach them to lose. Teach them that winning will come in time as they learn to get it right. Some kids will catch on faster than others.  They’ll be up there on the podium in the champion spot early. Some kids will start to sync in 8th grade when they grow into their bodies and gain strength. The most important thing is to keep at it. And to teach your kid that winning will come.  In other words, think of this season as the Miyagi season. Wax on, wax off. Even in losing they are learning to win. So teach them how to make the most of it, and don’t give up.

When you watch your kid lose, a lot, you may feel like you aren’t pushing them enough or giving them enough opportunities to gain experience. And in some cases that could be true. But before you sign them up for another club or extra tournament, ask yourself these some questions.

Is your son/daughter practicing every week?

If your kid is working hard and practicing each week you probably don’t need to add more to his or her schedule. You’ll burn them out very quickly if you overwhelm them. They’ve got other responsibilities that they need to have time for, like homework, chores, time to relax, and time with friends and family.  Instead, focus on getting the foundation right.

Can your son/daughter understand how a match works?

Go to a high school wrestling meet and give your child a copy of a score sheet. Ask them to follow along with the match and tell you who got what points and why. After a few times of doing this they will understand how much points matter in a match, and the basics of how a match works. Can they see what a reversal is, how back points are earned? Maybe your son or daughter isn’t doing well in matches because they just don’t know how it works.

Has my son/daughter learned the basics?

Good stance, takedowns, standups, half. Does your kid even cover correctly? If you’re wondering, talk to your coach and ask them to test your child on the fundamentals. Schedule a time outside of group practice. If they aren’t getting these right there is no way they will win. Until they get these down well, don’t move on to anything else.

Is my son/daughter being challenged enough in practice?

If your child does not have a wrestler to practice with that challenges them, they won’t get better. Find someone that your child can really have a go with.

Has your son/daughter got the basics down, but they still aren’t winning?

Talk to your coach, because it could be time to start learning new moves. Your coaches will also have advice on how to improve in other ways, through conditioning and strength. For example, Silas was struggling with some different things. After watching him and coaching him a bit, our high school wrestling coach suggested that he start carrying the dogs outside when he takes them out. Silas was a bit confused. Coach explained that a little extra work like this will help him build strength to stand up and get out.

Don’t be afraid to let your kid wrestle in tournaments. You won’t be afraid, actually, if you keep in mind that this time is about getting them comfortable with the sport. You might not go in and win the tournament. But you’ll get used to the yelling crowd, the ref, the lights, the mat. Experience is the best teacher. Don’t overdo it, but don’t be afraid to get out there either.

Understand that there will be tougher years.

Kids grow and change a lot in these years. Even if your kid is the opposite end of the extreme and is winning all the time, start having them practice with some kids that are older than them. You might be able to win every match in 6th and 7th grade, and then you get to 8th grade and all your opponents have built muscle over the summer. Make your kid fight for a win somehow.  Or maybe you’ll see a year like Silas’ year, where he is wrestling kids that are his weight but are older than him. That will just teach them to work harder, and there’s nothing wrong with that!

I don’t think every kid should get a trophy, don’t misunderstand. However, I do believe that your kid is awesome, and deserves to be celebrated for doing something as difficult as wrestling. Kids need to receive constructive criticism, sometimes firmly.  This should not be done in front of the whole crowd to embarrass them, take them to the hallway to talk it out (not scream it out…but that’s a whole blog post in itself.) Then, celebrate them. There has never been a tournament that I did not take a photo and proudly post it on Facebook. I am never, ever, embarrassed when my son loses. When Silas got pinned twice and got last place a few weeks ago, his picture was up just like if he’d won the whole thing. Whether he’s got a 6th place medal or a champion trophy, he’s awesome.  And brave. Wrestling is hard!  When was the last time you put yourself out there in front of a whole gym full of people? Celebrate them.

Silas has a lot of season left. But whether he keeps losing or his season starts to improve, like he himself said, it’ll be a great season.

Want more from a mom’s point of view? Check out “Why you should encourage your kid to give wrestling a try”

Want to give YOUR point of view? Send your ideas or articles to IAwrestlecontact@gmail.com

One thought on “Learning to Lose: Why You Shouldn’t Be Discouraged If Your Kid Doesn’t Win”