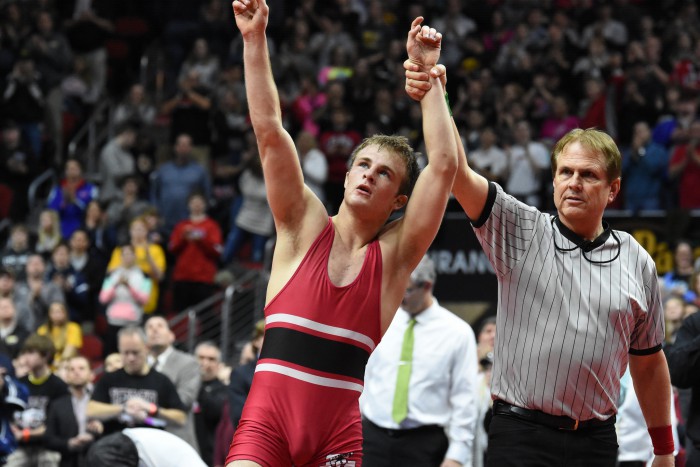 InterMat High school analyst Josh Lowe has updated his top 100 seniors* (class of 2016) and the recent addition to Iowa high school’s four-time state champion club, Carter Happel of Lisbon, leads his fellow statesmen as the top Iowan. This is an impressive senior class for the state of Iowa, with a total of seven wrestlers making the top 100.

*Note to view the top 100 list, you must be an InterMat Platinum subscriber

Happel remains at the top after moving up two spots from the previous set, to #36. The next closet Iowan and biggest mover of the bunch is Dubuque Hempstead’s Gannon Gremmel, who returns to the top 50 at #43 following his All-Star victory over Carter Isley this spring. Despite a FloNationals finals appearance and a USA folk national title, Isley drops down to #58 in the rankings, which puts him directly behind Southeast Polk standout Ethan Andersen.

Speaking of guys who made some big moves in these rankings, North Dakota State bound Colton Clingenpeel has made a 14 spot jump since January, now being ranked #85. Clingenpeel dominated his way through the state tournament, and made the finals of USA Wrestling’s Folkstyle nationals attributing to his boost.

Remaining nearly unchanged were Sam Cook and Jack Wagner who each improved one spot from the previous rankings to #73 and #83 respectively. Both wrestlers will be headed to Iowa next fall, though Cook’s future will be in football.

Six additional wrestlers also appeared in InterMat’s rankings that will be heading to either Iowa, Iowa State, or Northern Iowa next fall.

Heading to Iowa will be #3 Alex Marinelli (Ohio) and #26 Kaleb Young (Pennsylvania). Along with Happel and Wagner, they give the University of Iowa a total of four top 100 recruits for 2016.

Gremmel wasn’t the only Iowa State recruit to improve his stock from the last set of rankings by InterMat, as Sammy Colbray (Oregon) moved up four spots to #14 and Kanen Storr (Michigan) moved into the top 50 at #45. Storr’s big boost comes after taking second at FloNationals, followed by a NHSCA national title in Virginia Beach. The fifth top 100 recruit is another recruit out of the state of Michigan Ian Parker, who was unchanged at #72.

Rounding out the out of state recruits was future Northern Iowa wrestler Rudy Yates (Illinois), who came in one spot higher at #24. Yates will join Iowa prep Isley as the two top 100 wrestlers for Doug Schwab’s 2016 recruiting class.