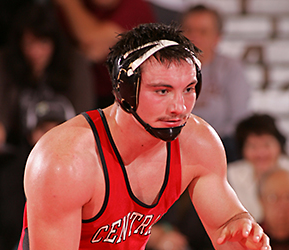 Here it is. The conclusion to our nine part D3 Preview series ends with the Central team in Pella, Iowa. You can tweet your thoughts on the Central wrestling lineup  or any of the other previews that you have read so far to @IAWrestle and @RossIAWrestle using the hashtag #D3wrestle.

In 2015 Central head coach Eric Van Kley took just two wrestlers to the NCAA tournament in Hershey, Pennsylvania, but both of them walked out of the arena with All-American finishes so heading into the 2015-16 season you can bet that Van Kley will look to build on his momentum, and look for bigger things out his returning All-American.

That All-American is junior Matt Seabold at 197 pounds, who may have been in one of the toughest weights the IIAC has to offer, as all three automatic qualifiers wound up on the podium, but the good news is that Wartburg’s Gerald Roman is the only other wrestler returning. Van Kley will be leaning heavily on Seabold to set an example for his team as he looks to push more into the NCAA tournament.

Central returns an additional two place winners from the 2015 regional tournament that will look to move a few slots up at the qualifier to book their trip to nationals. Senior Jay Pike should be back at heavyweight and junior Zach Moss is expected to be back as well. With the graduation of Sam Apland, it appears that Moss will make his way down to 174 to fill that spot.

Aaron Anderson will be a name to watch at 133 pounds for Central as he looks to be fully healthy after spending most of his junior season on the shelf with a knee injury. Anderson is looking for his fourth go around as a starter for Central, and was ranked for the most part of the 2015 season. Anderson should be a dark horse contender for one of the NCAA qualifier spots.

At 165 pounds we could see two wrestlers looking to return to the lineup. Cory McClearly is a sophomore who finished last season at 165 pounds, but two year starter Ryan Vandall is looking to go up two weight classes to challenge McClearly for the spot. Vandall was a 22 match winner in 2015 and may be the favorite.

Junior Mike O’Connor and sophomore Jahleel Vester will in all likelihood remain the favorites to retain their starting spots from a year ago. O’Connor put together an impressive campaign going 19-13 for Central.

From there we will see some new faces in the remaining three spots in the lineup. All-American Dan Page will leave a big hole at 125 pounds, but Van Kley does have two talented sophomores from California to turn to in AJ and CJ Pestano. It’s hard to gauge which one is truly the favorite, though CJ went 20-7 last year compared to AJ, who went 9-10.

The decent of Moss opens up a spot for sophomore Steven Candley to try and make his way into the Central lineup, and he is expected to be pushed by incoming freshman Austin Laabs at the 184-pound spot.

That leaves a trio of contenders looking to replace Vandall at 149 pounds and that spot is expected to be filled by sophomore Elden Esterly or two freshmen Jordan Challen or Tanner Hocker.

It should be a solid season for Central as last year they went 8-4 as a dual team, finishing fourth in the IIAC – it’s best finish since 1995. The lineup is filled with several veterans who will be able to carry a bulk of the load while the new faces get into the groove of full-time starter status.