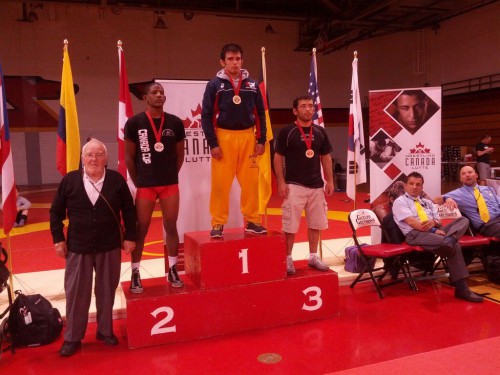 While we are only just a few months into Tony Ramos’ international career, he has yet to take a loss from anyone on the planet since dropping down to the 57 KG freestyle weight class (and you have to go all the way back to December for his last loss). Yes, Ramos is off to a truly special start to his post-college career as he can now add Canadian Cup champion to his credentials.

Ramos took the U.S. Open off, and was planning to take the entire year off from competing while he made the adjustment to freestyle, but all of that now seems like a silly afterthought. He ran through the World Team Trials taking down Angel Escobedo, Nico Megaludis, and eventually Sam Hazewinkel.

This time he ran through some non-national competition, picking up a technical fall in the finals (11-0 win), after picking up a 8-1 victory in the semifinals. Tony thrived this weekend on his leg attacks, as he was able to get single legs, almost at will, in his last two matches making his wins look fairly easy. Not only was Ramos on his offensive game, but his defense (specifically his re-shots) was where he able to pick up quite a few points in the final. A little commentary from those who aren’t experts on the international stage, while Ramos has been looking really good with his single leg attacks, you shouldn’t assume that he will be able to do the same at the Worlds. One thing about these wrestlers on this level is that they didn’t get to this point being a one trick pony. As Ramos wrestles more matches, his opponents will get more video on him and will be “easier” to scout.

Let me get this post back to the positive spin now. Ramos has had unreal defense and been able to fend off some shots that he has looked absolutely dead to rights, and he turns it into his score. Sam Hazewinkel is a really good wrestler, and Tony beat him twice in a row. There is no doubt in my mind that Tony is good enough to stay undefeated, it’s just worth noting that as opponents can scout him more, they will look for ways to slow him down, as one of his strengths is his match pace. Ramos is on a roll right now, and hopefully McDonough can pick up a gold at the University Championships, to keep this friendly little rivalry going.

Considering Ramos get married in a few weeks, it will probably be a bit before we see him back in action on the mat. One thing is clear as Ramos finishes his tune up, is that even though he will be six months removed from his winning his NCAA title, Ramos is ready for the World stage.

Lot’s to check back on IAWrestle this week as Tony (Hager, not Ramos) had a chance to look into Iowa State’s wrestling program, and Iowa’s Matt McDonough will be competing in Hungry at the World University Championships this week!

UPDATE: Here’s some video, I will do my best to find individual matches, but in the meanwhile I will provide whole session and try and find where Tony’s match is.

Finals (he is up first so just press play), and apparently the other videos aren’t working correctly (at least for me).

UPDATE 2: USA Wrestling comes through on results for us.

At first glance in the results we can see that Ramos outscored his opponents by a score of 29-2. That is almost a Brent Metcalf-type performance. The two points Ramos surrendered were for failing to score while on the 30 second shot clock. I am not sure about the match with Ewald, but in the match with Takahashi, I am not necessarily certain it was warranted. I know I am biased, but it appeared to me that Ramos was the aggressor in the match. Given that Tony was getting to Takahashi’s leg with ease in the second, I think it is clear that Ramos wore him down with all of his action. It doesn’t matter as in the end, Ramos is still the idol of perfection.